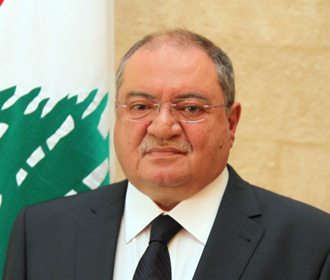 Caretaker Defense Minister Fayez Ghosn on Friday disclosed details related to several security incidents that have recently taken place in the country, noting that the information is based on investigations conducted by the army's Intelligence Directorate, not on “analysis or speculation.”

“Some might wonder why we have decided to disclose the information we have obtained, especially that sensitive intel is usually kept under wraps by security agencies, but I stress that this decision is a result of my conviction of the need to say things as they are, in order to put an end to some of the speculations and hypotheses that aim to deviate attention from the facts and create confusion among the ranks of the Lebanese public opinion,” Ghosn told reporters at a press conference.

The minister revealed that “the Intelligence Directorate arrested Hasan Hussein Rayed on July 27, 2013 and he confessed to executing some terrorist operations and preparing booby-trapped cars in collaboration with Omar Ahmed al-Atrash and other culprits.”

He added that Rayed was also involved in the Wadi Rafeq ambush that left four young men dead on June 16 and that Omar and Sami al-Atrash and four Syrians took part in the attack.

In addition, the man confessed to taking part in the preparation and detonation of two roadside bombs on the Hermel road on July 7, which left an officer and several soldiers wounded, according to Ghosn.

Rayed also told his interrogators that the Omar and Sami al-Atrash, Zuheir Hussein Ammoun, Sameh al-Breidi and Ahmed Abdul Karim Hmeid were involved in preparing several booby-trapped cars with the aim of staging attacks in Beirut's southern suburbs and other Lebanese areas, and that Omar al-Atrash is “the mastermind of this group.”

Turning to the July 9 Bir al-Abed bombing, Ghosn said that, according to investigations, the Kia car used in the attack was stolen at gun point from the Khalde area on the eve of the blast, revealing that Syrian national Hussam Diab Ghanem Abu Halaq was arrested by the Intelligence Directorate and that he had ties to other individuals suspected of being involved in the bombing.

The minister also revealed that the Intelligence Directorate has “strong leads” in the case of the May 26 rocket attack on the Beirut southern suburb of Shiyyah and that it was pursuing one of the suspects.

“The directorate has accurate information about the handlers of these individuals, about the mastermind and the involved groups and about their affiliations and nationalities,” Ghosn added, referring to the Shiyyah attack.

“I'm sounding the alarm to say that Lebanon has started to fall into the grip of terrorism and that everyone must realize the seriousness of this period,” Ghosn said, urging all Lebanese to “support the military institution and not to harbor these fugitives.”

Ghosn's revelations come one day after 24 people were killed and 325 others wounded in a powerful car bombing that went off between the Beirut southern suburbs of Bir al-Abed and Ruwais.

Actual facts? Am I dreaming? This person seems to be apt and competent.

At least now the Brigade of the Four Martyrs can stop hunting for Arsal's mayor, the culprits have been uncovered.

Hopefully the Intelligence Directorate in collaboration with the ISF can put an end to future terrorist plots and again put Lebanon closer to the right path.

Hang the bastards, bring back the capital punishment this way the criminals will think twice before they act in a serious crimes, and the public will sleep at ease. And don't worry about DEMOCRACY preachers they can apply there thoughts to themselves....crime of any kind doesn't know DEMOCRACY justice does....do your homework check there situation they are crying the Blues every day and living in fear blaming this and that to others.....

This article is about attacks that took place weeks ago.

How come they found the perpetrator immediately while those who put bombs and killed Harriri, Twieni and all the others are still at large. What a weird country indeed. It's a bomb people which is a common occurence in lebanon. Why now should we put so much emphasis on it when we did not when we had then every week in the last fifteen years? Weird country indeed.

I'm glad they are finding details about who did this, but I'm surprised how come this is the first time the authorities seem to be so competent at it, because it was anti-Hezb? What happened to the other dozen bombs that we know NOTHING about?

Shias are more important than Christians, Moslems or Druze, didn't you know? they're 1st class citizens...

ashraf annas. However, Aoun, Gebran and Nicolas have bowed to Hizbullah to the knees. they withheld the data when M14 was targeted but now they are releasing it as fast as possible.

@ LebDinosaur
Don't be fooled. Time will show you that our intelligence gathering service bureau can indeed be effective but it is teethless and its success is short lived as pretty soon you will see the whole case becoming convoluted and diluted down for political reasons. Alas this is our sad state of affairs. When will it change?

stop complaining.
who are you accusing of not doing their job?
it is as if M14 were not represented in the security agencies.
millions of dollars have been invested in the "fere3 al ma3loumat" (aside from what was stolen because m14 cannot see cash without pocketing it).
why didn't they do their job of finding the culprits?

I do not believe any of his BS