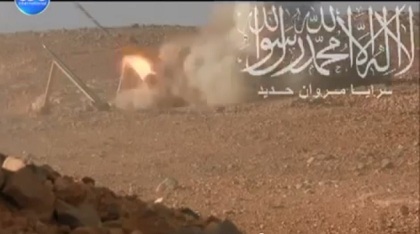 The “Marwan Hadid Brigades” claimed responsibility on Tuesday for the firing of rockets in the Bekaa region on Sunday, reported LBCI television.

The previously unknown group claimed responsibility for the attack in a statement and video aired on Youtube.

On Monday, President Michel Suleiman expressed his “grave concern” with the shelling that took place in Hermel, tasking the Army Command with “determining the location from where they were fired in order to tackle the situation with the appropriate means.”

Five rockets landed in and around Hermel, a Hizbullah stronghold, on Sunday, a security source told Agence France Presse on condition of anonymity.

"Two rockets landed in the town of Hermel, in an area between the Mabarrat teaching association and the Masharii al-Qaa area, causing no casualties," the source said.

"Another three rockets have landed now on the outskirts of Hermel," he added.

It was not immediately clear whether the rockets were launched from inside Lebanon or from across the border in strife-torn Syria, said the source, although state-run National News Agency said they were fired from Syrian territory.

Hermel and other areas of eastern Lebanon, a bastion of Hizbullah, have been hit by several rocket attacks launched from Syria in recent months.

The repeated violations prompted Suleiman in June to file a memorandum to the United Nations and Arab League.

ya habboul, hizbullah's operations in a foreign country (syria) is an invasion - in the same way that Iz invaded southern Lebanon.

Terror vs Terror..I hope they destroy each other...

Ya khafeef. We're now thanks to you and your friends the Israeli invader of Lebanon to the Syrian Resistance.

lol ben of zona you have no shame do you?

every m14 is a prophet now, and most surprisingly, they care so much about HA that they give them advices "for their own good"

that;s not the issue sdorky, dont dumb yourself more than you really are. you can't give advice to someone you hate and expect him to believe you're "only saying this for his own good"

Ahhhh put a lid of it Motormouth aka BSThrower. Seriously man you are stale and lame.

And non, citoyen d'ispahan. What should I be ashamed of? Comparing hezbollah to the Israeli invader? That's exactly what they are doing to Syria. The israelis were in Lebanon to protect their border, the farsi terrorists are there to protect zaynab's shrine. That's for the official stories....

The evil hizb is worse than the Israelis, that's the truth. 5 min ago, I was on the phone with a chiite friend from Bint Jbeil, living in Hamra.... Guess what, she's on the Persian payroll.... But she strongly disagrees with what they're doing in Syria and in Lebanon. Only Aoun the baboon is blind enough to see that his allies aren't supported by the chiite community... Hassan is on the loose, someone needs to catch him before he destroys the country.

Well stated Starsky! Don't bother with that Ignoranus BSThrower...always talking from his rear!

Endless, the thumb up is from me. Your M8 friends won't support you unless you give them UNCONDITIONAL support to what their leaders command them to think, say, or do.
Si t'as un esprit critique, t'es mal barré.

Unfortunately it seems as though Lebanon will be going through some very dark days in the months ahead. I don't support Hezbollah, I am actually opposed to the majority of things that they do inside and out of Lebanon but at the end of the day the members are Lebanese. The party may have an Iranian agenda but the members are Lebanese and we as a nation need to unite around the state and our fellow country men. There are two solutions to the problem... Hezbollah must Leave Syria and integrate the arms and militia to the army. We as a nation don't need to be seeing our young men sent back to cemeteries. Let the Syrians fight and kill amongst themselves... This isn't anyone's fight but their own!

Yes very good point lebanon4ever and I and all TRUE Lebanese agree with you but you have traitors (HA) in our midst claiming to be Lebanese but they are nothing but islamic extremists taking their cues/orders from Iran. The worse part of it is you have Lebanese wantabee idiots (I refer to the 3 stooges Motormouth, BSTHrower, Southern) chanting, cheering and worshiping these animals while they state they love Lebanon. Pathetic!

We should not gloat about Lebanese being bombed. We should have a military response to this. We should not be there fighting on their soil taking sides, we should be neutral. So HA is wrong to be there. We should respond to whomever violates Lebanese soil, and attacks our citizens. In this case it appears to be Takfiri. We should have a military response against them. At the same time, in the same way, when the Syrian Army attacks Lebanese soil, as they have done in recent months, our Army should respond. Right now, we only respond to Sunni extremism, not Shiite. We are not balanced because of HA weapons.

benzona, with each passing year I become another, and all what I've learned most relevant here is that all I'm owed appears different, and so does too all that I owe. While it's a feelgood sort of sentiment to have an occasional net thumbs up, I don't pay much attention to it. Sadly my friends are reluctant to discuss politics and so I come here(and dwell elsewhere) for discussion only and not appeasement.

I regard no one to be more or less of a friend than another, except the1phoenix, his thoughts are always vicariously mine. Point I'm trying to make is I guess that simply speak what comes to mind here at times is and pay no mind to votes.

And thanks for the advice, I'd never give unconditional support to any political group and am wary of those who do, his comment was just amusing.

yes benzona, you should be ashamed of this comparison, because the points of difference are endless:
-HA never kicked out a people of their land
-HA resulted from foreign occupation and the right to resist is internationally recognized
-takfiris came from god knows what holes thousands of kilometers away to kill for sectarian reasons, to purge out alawites, chiristians and shias (in this they are like israelis who purged palestine from non-jews)
-the attacks on hermel and border villages were not justified by any legitimate reasons, like resistance or fighting back those who expelled you from your land, they were deliberate attacks
-where israel's response was to deliberately target civilians and civilian infrastructure in punishment for combat operations (again, in this the takfiris are the same) HA's response was aimed at armed men and they were very careful in not making civilian casualties.
if you can't see that then you're blind beyond any hope

you can also be ashamed of using the lame and very weak "my shiite friend told on the phone..." to support your dodgy points.

werent you speaking of respect yesterday benzona? just see this as an example of why you dont have mine, and stuff your bombone where you know.

The Hezb is in Syria taking out takfiri combatants because thing like this were happening :)

geeze man, please, stop taking people for stupid, aren't you afraid at some point they're going to feel insulted?
yes they are present in the north and north east, and they have attacked kurds, but they are also all over syria and especially in every "rebel" area. who executed children on basis of "heresy" in aleppo? who beheaded hundreds of civilians last week in north latakia? who bombed beirut's southern subburb last week? now THAT would be a strange feat if they were only in the far east, wouldnt it?

thanks anonymetexasusa, but u loosing time arguing with mowaten, he is just here to repeat almanar propaganda on naharnet, that's his job...

Good good. But keep in mind that he's paid to destroy Lebanon. You can tell that he's on a foreign payroll. Can we blame him? There are no job opportunities in Lebanon.... He's got a family to feed.

benzona, you're such a cheap person, i'm constantly amazed by how low you can fall

cedre > just say things as they are, you dont want to argue because you know you're wrong
anonyme > rofl, what did you "expose" again? i understand, it's nice to flatter yourself with fantasy when reality has it so hard on you, but when you do this here where everyone can see your comment, it kinda makes you sound stupid.

..the Israelis turned sunni vs chia and this greatly pleases you? why have you got it in so much for your neighbours yet your REAL ENEMY you love? may you and your people ROT, from an Ghanaian.

You're not a lost cause. I wish Lebanon had more people like you that think before taking a stance. As you..... Lebanon is a country of sheep.

must admit i didnt get it either, acute coronary syndrome?

The tablet is messing up with me.

I cannot understand for the life of me how some of you guys are cheering this on???
Even if you hate HA and want them gone and all the BS excuses M14 uses to try to blame HA for this...How could you be still cheer leading these terrorists on?? Do you guys not see whats happening in the region?? Not just Syria and Lebanon, but everywhere. Are you guys that blind to see that everywhere there is blood shed in the region, Takfiri groups are to blame. Yet you still cheer them on..Shame

FT, although not a HA supporter, I usually am on board with your logic. Let's not go back in history too far and bring back civil war... That is like saying HA used to want to have an Islamic state in Lebanon. Its like bringing back a TWA flight with civilians on board. Whomever you are referring that called in Syria for assistance in the civil war was not necessarily representative of all Christians. Also, what are Christians in the Middle East to do to survive surrounded on all sides? We have been disarmed in Lebanon, and have no weapons elsewhere. They have been a minority without a Middle Eastern state sponsor for years. We have been plagued with the need to make alliances over history for survival. We are not like the Shiites who can count on Iran. We don't have a Middle East sponsor. Some alliances have worked, some have not.

You're on coke, you live in Texas and you're leader is Hariri. Any one of those reasons is enough to tell me that you're not worth a second of my time. I have already wasted enough of it on you. Do us all a favor and Go play along the Mexican border

yes, you've mentioned that phrase before. however, im not convinced you know what it means.
ohh, ok. I get it now. You're on coke and you've been listing to Queen all day. Makes sense

Damn these groups are popping up like boy-bands all over the place. Halla l'shabéb kamen nazzalo video-clip... Pity, pity the Nation...

When it's not Dr. Arreet 7akeh shooting his mouth off on a weekend, it is his lunatic Sanni brothers shooting their rockets. Whatever pleases Sanni First.

wow, well done naharnet, censoring a comment when it strikes a nerve and had no reprehensible content only serves to confirm i am right and you cant deal with it.