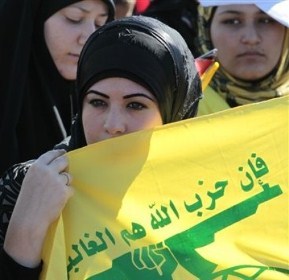 The United States on Thursday imposed sanctions on four Hizbullah leaders for alleged operations in Syria and elsewhere in the Middle East.

The U.S. Treasury Department said the sanctions target senior members of Hizbullah responsible for activities including assisting fighters from Iraq to support the regime of President Bashar Assad in Syria, where civil war has raged for more than two years.

The designated Hizbullah leaders also made payments to certain factions within Yemen and to military leaders responsible for "terrorist operations" in Egypt, Jordan, Turkey, Cyprus, Israel, the Palestinian territories, and Iraq, the Treasury said in a statement.

Hizbullah, which the U.S. has branded a "terrorist group," was using its expansive global network to extend its "malign influence," and the influence of its patron Iran, throughout the Middle East and beyond, the Treasury said.

"Whether ferrying foreign fighters to the front lines of the Syrian civil war or inserting clandestine operatives in Europe, the Middle East, and elsewhere, Hizbullah remains a significant global terrorist threat," David Cohen, Treasury under secretary for terrorism and financial intelligence, said in the statement.

"So long as Hizbullah spreads instability, conducts terrorist attacks and engages in criminal and illicit activities around the world, we will continue to sanction Hizbullah's operatives, leaders and businesses, wherever they may be found."

The sanctions prohibit Americans from having transactions with the four designated Hizbullah leaders and freezes any assets they may have under U.S. jurisdiction.

He was probably wearing his famous blue raincoat at the time of the statement.

HahahAa someone is a little upset by this minor inconvenience

banima#roof, dont waste your time with Southern, he thinks Deir -Al-Saleeb is a church......

It's very clear you are clueless and classless. Ok, you can now insult me, because that's about all you got...Bozo

One (1) is not that lot of dissidents. And in terms of mentality, your nick would definitely suit you if you were from the U.S..

Of course, the U.S. has the world largest economy with global financial institutions that assert power over about every dollar that transitions every corner of the world. i.e. the leban bank that was called out by the U.S. Treasury Department for laundering HA drug money, that Lebanese bank no longer exist....Now insult me because you know that I'm right.