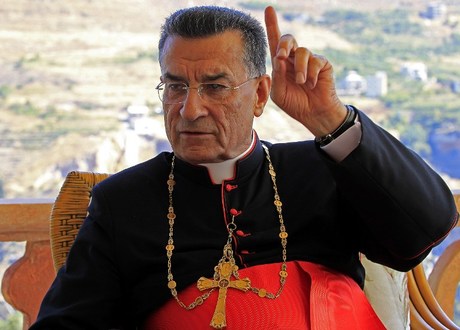 Patriarch Beshara al-Rahi inaugurated on Sunday the first Maronite church in eastern Europe, calling for an end to the confessional conflict in Lebanon and rejecting the political hegemony of one sect on the others.

During his sermon at Saint Charbel church in the Romanian capital, al-Rahi said: “We ask for an end to the current political-sectarian conflict and the attempt of any of the sects to impose political hegemony on the others and to act unilaterally in decision-making.”

He reiterated the need to form a new all-embracing and capable Lebanese government, which has the ability to confront challenges mainly political and security stability.

“Lebanon has an important role to play in the region to achieve peace and stability through its political system that is based on the separation of religion from the state and the full respect for all religions,” he said.

Al-Rahi said the system is further based on pluralism, coexistence and the balanced participation in governance.

“Our political leaders don't have the right to obstruct the role that Lebanon plays through its location in the heart of the Mediterranean Union,” he said.

The patriarch urged officials in the Arab World to guarantee political stability and security through diplomatic means away from violence, war and terrorism.

Al-Rahi will return to Beirut from Bucharest on Sunday but he is scheduled to travel to the Vatican on Tuesday to attend a meeting of cardinals presided by Pope Francis.

God Bless you my Patriarch for your unwavering love for this country and for Romania. Your love of Lebanese and Syrian Christians becomes more evident daily, monthly, and since the first day you took office. The 300 strong Lebanese Maronite community in Romania welcomes you with love and compassion at these difficult times in our beloved levant. Your Eminence: We, the Christians of Lebanon and Syria are being persecuted, chased, hunted, and often killed by these Saudi-Harriri-Gagaeeeee takfiris. We ask that you and Sayyed Hassan keep us in your prayers and protect us from evil and harm.

“We ask for an end to the current political-sectarian conflict and the attempt of any of the sects to impose political hegemony on the others and to act unilaterally in decision-making.”

On behalf of the majority of Lebanese, I am so thankful that your Eminence finally talked about the "attempts" of some sects, namely the Harriris and Gaegaeees to impose hegemony on other sects. I have been waiting for these clear and succinct words ever since Mustaqbal took up illegal arms and declared war on minorities in Syria. Bless you

M14 does not support takfiri just because they have Sunni members. Just like HA are not all extremists. I wish everyone on this board would stop saying just because they have Mustaqbal members, it means they support terrorism. I can only guess the number of moderate Sunni in Lebanon and Syrian vs extremists. But I would assume its about the same for Shiite. I cannot believe how we paint with such a broad brush. However, I go agree that the majority of extremists, that "hate" minorities, want to kill Christians, burn our churches, murder our clergy, causing most of the attacks in our country, right now today are Sunni extremists, but NOT part of M14.

The real question is, how many Christians/Christian areas since lets say 2006, have burnt tires, planted bombs, made checkpoints, formed a state within a state, attempted to take over other areas, engaged in targeted assassinations. We are the weak and the hunted. Again, because we sell ourselves out for a vote and a dollar. Aouni and Ouwet both. I wish we could get rid of these Sunni takfiri emerging all over the Levant, at the same time get rid of HA arms and state within a state. It doesn't seem there is a political movement that is in line with doing both

I read the Church was funded by Lebanese Maronites and Muslims living abroad and in Lebanon. That's how everything should be. hand in hand.

does it means he wants the constitution and taef to be applied which hail for secularism and the end of political sectarianism?

Oh my god, I had to come and see this I true with my own eyes. I love it.

He reminds me of me in my early school days, raising the hand and finger asking "miss, finé rouh 3al toilette?"

I didn't intend to shock anyone. I was ridiculising myself for your information. Why do you see evil everywhere?

Patriotic Lebanese like RFT are funny people.... You need to losen up a bit and let humour penetrate you. It'll make you feel better. It's like going to the masrahiyyé free of charge here on naharnet ;-)

patriotic lebanese, you should bve reported for insulting Lebanon by praising HSN who insults Lebanon and its institutions and people on daily basis by acting above the State and the LAF.

Roo2 ya zalamé. Darouré to use such words such as low-life and comparing the Bible to the Koran?