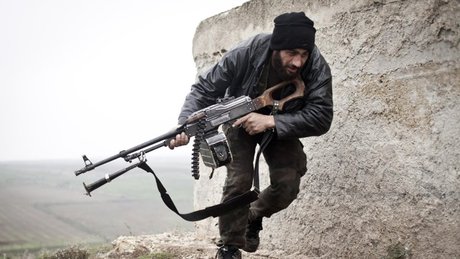 Six of the most powerful rebel factions in Syria issued a joint statement on Thursday telling an al-Qaida front group to withdraw from the northern town of Azaz bordering Turkey.

In a separate statement, rebels in central Syria also called on the Islamic State of Iraq and the Levant (ISIL) to leave Homs province.

The statements came amid fresh clashes between ISIL militants and the mainstream rebel Northern Storm brigade in Azaz.

Hours before the statement by the six rebel groups was made public, hundreds of ISIL fighters were advancing towards the border post with Turkey near Azaz.

Major rebel groups Ahrar al-Sham, Liwa al-Tawhid and Jaysh al-Islam all signed the statement urging "our brothers in ISIL to withdraw their troops and vehicles to their main headquarters immediately".

The statement also called for "an immediate ceasefire" between ISIL and the Northern Storm brigade in Azaz.

It said both ISIL and the Northern Storm had to "resort immediately to the Islamic court, which will remain in session in Aleppo for 48 hours", to settle their differences.

The other three signatories to the statement were Suqur al-Sham, the Furqan brigades and Liwa al-Haq.

The signatories, all Islamists, have said they do not recognize the main opposition National Coalition or any other group that operates outside the country.

Thursday's statement was the most powerful warning yet by Syria's main rebel groups to ISIL, whose fighters are trying to seize opposition-held areas.

ISIL took control of Azaz on September 18, after hours of fierce clashes with the Northern Storm brigade.

Because of the fighting, the Turkish authorities closed the Bab al-Salameh border crossing, a vital lifeline for rebels and civilians in opposition-held areas.

Meanwhile, in central Syria, the rebel Military Council in Rastan in Homs issued its own statement calling on ISIL to withdraw from the north of the battle-worn province.

may God bless the Free Syrian Army, may God give them strength to overcome the brutal dictator And his sbires.

you never predicted a thing, you keep on saying that the rebels are all qaeda... this shuts your big mouth and shows you that the opposition are not what you think in your naroow binary M8 mind....