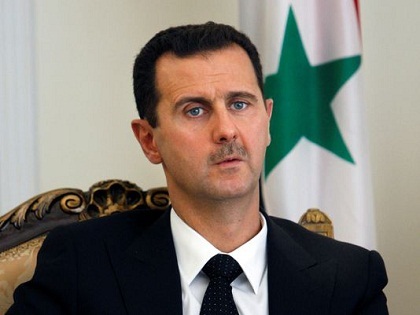 Syrian President Bashar Assad warned Turkey it will "pay dearly" for supporting rebels fighting to overthrow his regime, in an interview broadcast Friday on Turkish television.

"In the near future these terrorists will have an impact on Turkey. And Turkey will pay very dearly for its contribution," Assad told the opposition station Halk TV.

He was being interviewed over the presence of al-Qaida-linked rebels on the long and volatile border between the two nations. There are several hardline Islamist groups among the numerous rebel formations fighting in Syria.

"It is not possible to use terrorism as a card and put it in your pocket. Because it is like a scorpion which won't hesitate to sting you at any moment," said Assad.

Relations between once close allies Damascus and Ankara have deteriorated since a popular uprising which began in March 2011 in Syria snowballed into a full-blown conflict that has claimed more than 115,000 lives and forced millions to flee.

Turkish Prime Minister Recep Tayyip Erdogan's Islamic-rooted conservative government has become one of the most fervent supporters of the Syrian rebellion.

"All that he says about Syria and its people is a heap of lies, that is all... Erdogan is doing nothing but supporting the terrorists," said Assad.

On September 17, Turkey downed a Syrian military helicopter that it said had violated its airspace, in a move Damascus said was aimed at heightening tensions between the two countries.

Assad admitted the helicopter had violated Turkish airspace, but said it was justified to prevent "the infiltration of a large number of terrorists".

He said the two pilots had been "savagely decapitated" by Syrian rebels who captured them when the helicopter came down on Syrian territory.

Turkey's parliament on Thursday extended for one year a mandate that would allow the country to send troops to Syria if necessary.

Turkey authorized military action against Syria shortly after a mortar attack fired from the neighboring territory killed five of its civilians in October last year.

Since then, the Turkish military has retaliated in kind for every Syrian shell that has landed on its soil.

This I am waiting to see!!

no need to wait, it is already happening.

the sad part is that it is innocent Turks who will pay the price for Erdogan's foolishness and collusion with the cannibals...

LOL @ ice-man:) You really figured him out pretty well...!

He'll send his Islamist kamikazes to turkey just like he was doing in Iraq since 2003. Since the revolution, bachar hired the nusra terrorists as well as the Hezbollah terrorists to prove the world tghe middle east can't work without him.

How foolish are M8 supporters.

God Bless you My President, the President of all the Lebanese and honorable Arabs seeking freedom and democracy. Terrorism is like a scorpion and you cannot simply put it in your pocket and sleep. Who knows more than you Dear President about scorpions that were bred and fed by Bandar and Gaegae and let loose in Syria to bite the innocent people and minorities with their venom. Thanks to people like you and Sayyed Hassan, you were able to develop an anti-scorpion chemical vaccine that exterminates scorpions in their thousands. Erdogan and his likes will soon taste the venom of scorpions he bred, fed, and cultivated. The moment of truth is fast approaching..... brace yourselves!

I hope that erdogan will be ousted and that we go back to a secular turkey wich can play a role model in the region bit that will be to tbe turkish to chose cause they still hv democratic election (hope they oust the guy..) but in syria democratic election meant 98% yes to assad and a lot of leaders in gail, exile other comitting suicides with miltiple bullet... The best part is when assad who was froends with cheker el abssi , hachem menkara, got mobies of abou adass.. Sent johadist to irak to fight imperialism is now preaching... Really nice move...

at least turkey holds democratic elections not like in the countries supported by M8ers LOL!

"It is not possible to use terrorism as a card and put it in your pocket. Because it is like a scorpion which won't hesitate to sting you at any moment," said Assad.

Interesting. I thought he knows best since he is the one who used this tactic in Iraq and Lebanon.

lol, those accusations always make me laugh. the only people who can believe that are people who know nothing about the dynamics of the region.
anyone who knows the first things about those terrorists groups of wahhabi, salafi, or muslim brotherhood influences know that have been fighting the assad regime since the 70's.
they were staunchly opposed to him because they consider the alawites "heretics" and they committed many massacres and attacks against the regime and the alawite sect.
the series of explosions in damascus, aleppo and hama in 1977, the massacre of alawite students in the military academy in 1979, the attempted assassination against hafez in 1980... and these are just a few examples....

they completely refuse the secular regime, and hate assad's sect, but they worked for him? not credible.

mowaten.... there is a difference between siding with the syrian regime and defending their history. we should never forget what Afez el Assad's syria did to lebanon. Not just him but all "arab" regimes of the middle east, from Nasser of Egypt to the Wahhabi Saudi Arabia and the obvious palestinian/zionist problem. They all promoted and financed terrorists and extremists. what goes around comes around. I don't put Bashar in the same boat as his father coz the father would have destroyed us in the 2005 protests. Syria has always believed lebanon is their 16th provence well before Assad took over. But Bashar is not his father and he had syria leave Lebanon and what is happening in syria is as wrong now as it was in lebanon in the 70s!

Syria played with fire just as america did in Afghanistan in the 80s and just as turkey, ksa and qatar will soon experience. what goes around, comes around and it will come round with these Brotherhood, Wahabi pricks one day inshallah!

in retrospect, we can analyse differing views on syria's intention when they invaded lebanon in 1976 but why did they stay till 2005? secular or not, they agreed with the usa and israel to takeover lebanon. the end result is that if you disagree or oppose Saudi arabia, you will be invaded with sunni extremist suicide bomme

Ado got my first green thumb ever.

Syrian regime would never had taken control of lebanese states if he haden't succed in dividing the lebanese parties, if it had not assassinated lebanese leaders, created armed group to use them to scare the lebanese people (and this till not so log ago with cheker el absi and co. for exemple) and of course if the curent march 14 wouldnot hv been ok (and profited of it of course..) but the worse are those who kept aligniing and supporting this regime even when it was still killing our political leaders... No?

again FT stupidity at work trying to say that the only ones who helped syrians during the occupation were from M14! LOL...

denying also what aoun said for years that syrian assassinated all those opposed to them, that the syrian gvt was a terrorist regime and so on... no terrorism needed? LOL!

aoun changed but for FT it is "pragmatism"..; M14 change and are against syria but for FPM they are hypocrits or whatever his stupidity makes him say! LOL

FT- whatever you have to keep telling yourself in order to justify your support to a sellout who is in bed with terrorists who continue to kill your countrymen and drag your country into the abyss(if Lebanon is truly your country.

Assad said: "It is not possible to use terrorism as a card and put it in your pocket. Because it is like a scorpion which won't hesitate to sting you at any moment"

fath el islam was created by assad, he used against lebanon, and then it came back to bite him.....

The law of Karma that Assad is teaching Erdogan...

no haile, they did! there were huge protests against erdogan's bellicose attitude!

Ok now we have the same story (sorry i cannot read the article u sent but i do believe the usa created al qaida and they "created" ben laden to to fight the soviets.. So on this point we agree.
But don't u think assad used salafiat to in lebanon(hachem menkara, cheker el absi, fabrikated abou adass...) in irak (sent to fight againt us troops)... ?....

Turkey it will "pay dearly"

are these the same threats you made towards israel? but still nothing done despite your "threats".... good barker little doer!

not a fan of Assad but I hope he's right (i said it for some time myself) re his comments on the nazi erdogan. i look forward to turkey being punished for its support of islamist based terrorism; i look forward to that slime ball erdogan being punished for his support of the otto-nazis and the armenian genocide. lets hope both assad and erdogan, two forms of sheer evil are crushed. the world will be a better off place without both of these scum bags.
TAKBEER

LF- do you really think this coward will ever dare to attack a country capable of defending itself against him? The only countries he ever meddled in were Lebanon a Iraq post Saddam.

Don't forget the gravy and sweet potatoes!...mmm and and cranberry sauce :P:P

Hashish is a hell of a drug.

Wonderful work! That is the type of info that should be shared around the net.
Disgrace on the search engines for not positioning this put up
higher! Come on over and consult with my webste . Thanks =)