One Killed in Shootout between ISF, Wanted Suspects in Ashrafiyeh 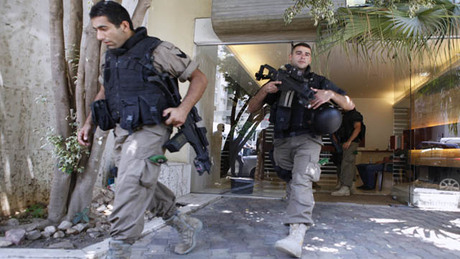 A wanted suspect was killed on Sunday during a shootout with an Internal Security Forces Intelligence Bureau patrol in Beirut.

LBCI television said that the shootout broke out between the patrol and two suspects wants on charges of theft.

The incident took place near ABC mall in the Ashrafiyeh area in Beirut.

The other suspect, who was not identified, also has a record of firing at ISF patrols.

Voice of Lebanon radio (93.3) later said that Yahfoufi was killed in a chase that ensued in Ashrafiyeh near the residence of caretaker Telecommunications Minister Nicolas Sehnaoui.

so did they catch the second suspect or not?
Naharnet... clarify the news.

Nick Sehnaoui is obstructing the justice with the STL. Jail him ! ! !

It's the truth, and you know it.

So if everyone is corrupt it is then fine to be corrupt! amazing logic ... are you running for office anytime soon?

ba3den what best Telecom minister? have you tried to make a phonecall lately? you guys are amazing in hiding behind your fingers and shouting slogans .. grow up and start thinking for yourselves

Scumbag wants to claim Ashrafieh for his master coz of (Ashraf) , they have been there at fate7 time

Go talk 2 idiots coz u are more idiot, shame of this country is ur boss and affiliates.