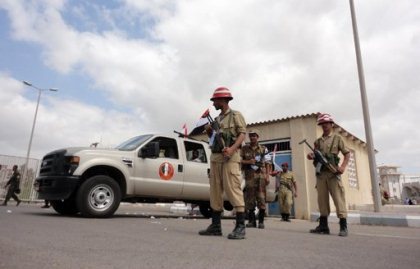 Gunmen in a vehicle opened fire at the bodyguard as he was leaving a store in the southern Hada district, where foreign embassies are located, a security official and witnesses said.

An earlier report said the ambassador herself had been the target of a failed kidnap attempt.

However, a Yemeni foreign ministry spokesman told Agence France Presse that Ambassador Carola Mueller-Holtkemper "is currently outside the country."

But "apparently there was an attempt to kidnap her bodyguard and he was shot dead when he resisted."

In Berlin, a foreign ministry spokeswoman said only that the government was "making intensive efforts to clear up the facts."

Medics in Sanaa said the corpse of the bodyguard was taken to the Saudi-German hospital in the capital.

Security forces sealed off the area after the shooting.

Foreigners are frequently attacked or kidnapped in Yemen, home to al-Qaida in the Arabian Peninsula (AQAP) which is viewed by the United States as the network's deadliest franchise.

"Unfortunately, the ransoms that were paid to release hostages seized by the network have provided it with the money needed to renew its activity," he said.

In addition to a ransom, they are demanding the release of female al-Qaida-linked prisoners held in Saudi Arabia in return for his release.

The extremists are also holding Nour-Ahmad Nikbakht, identified by Tehran as an administrative staff member of the Iranian embassy in Yemen, abducted on July 21.

Kidnappings are often carried out by tribesmen who use their hostages as bargaining chips in disputes with Yemen's central government and usually free them unharmed after tribal mediation.

But recently, AQAP militants operating from hideouts in the impoverished country's south and east have threatened foreigners.

Germany was among several Western countries, including the United States, which closed their embassies in August after U.S. warnings of an al-Qaida attack.

The alert was reportedly linked to the interception of communications between al-Qaida leader Ayman al-Zawahiri and the leader of the group's Yemen-based affiliate, Nasser al-Wuhayshi.

Yemeni authorities have since claimed to have thwarted the alleged plot, and there have been several reports of U.S. drone strikes killing suspected militants.