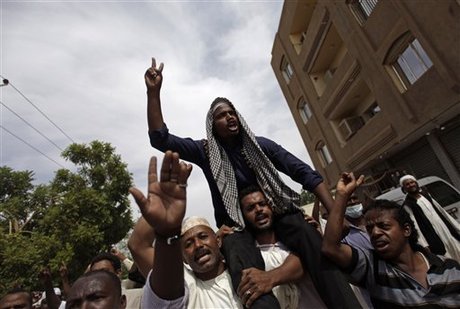 A Sudanese judge on Sunday threw out charges against 19 people who were among hundreds rounded up after deadly protests sparked by fuel price hikes, a lawyer said.

The judge said he found "no evidence against them", one of their lawyers, Mutasim al-Haj, told Agence France Presse.

They were among 35 people who appeared in Khartoum's Haj Yousef district to face charges of vandalism and causing a disturbance.

Trials are to continue for the other 16 with defense testimony on Monday, Haj said.

One police pickup truck was the only noticeable security presence outside the colonnaded, glass-fronted court building which lies opposite mud-brick homes on an unpaved road of red dirt in the impoverished district.

The 35 first appeared in court last Thursday, when Haj told AFP that none of the accused was arrested during the alleged vandalism or demonstrations.

They faced up to seven years in prison if found guilty, he said.

Sudan's government says it has detained about 700 "criminals" after the late-September protests.

The African Center for Justice and Peace Studies, a human rights watchdog, said on Saturday that more than 800 people have been arrested throughout the country by police and the National Intelligence and Security Service (NISS).

"The majority of detainees are in NISS custody and have not been charged with any criminal offense," the African Center for Justice and Peace Studies said.

Security forces were believed to have killed more than 200 protesters, many of whom were shot in the head or chest, said another watchdog, Amnesty International.

Among the casualties was a 14-year-old boy, rights groups say.

Authorities have reported 34 deaths after petrol and diesel prices jumped on September 23 when the government cut fuel subsidies, sending thousands into the streets in the worst urban unrest during President Omar al-Bashir's 24-year rule.

The government said it had to intervene when crowds turned violent, attacking petrol stations and police.

At the trials in Haj Yousef, a police witness testified that officers had orders to only fire in the air, Haj said.

"They didn't order us to shoot the demonstrators," he quoted the officer as saying.