Egypt Protesters to Stay in Tahrir despite PM Promises 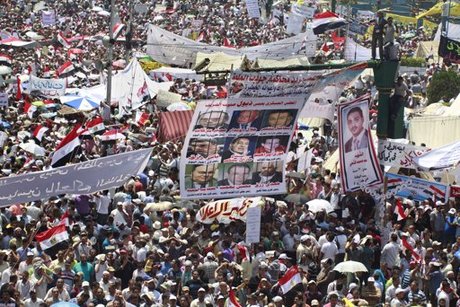 Protesters who spent their second night in Cairo's Tahrir Square on Sunday vowed to keep up their sit-in despite a series of concessions by the Egyptian prime minister.

Pro-democracy activists had camped out on the square -- the focus of protests that ousted president Hosni Mubarak in February -- after mass nationwide rallies on Friday to demand political change.

Hundreds who spent the night in the sweltering heat blocked traffic around the square on Sunday morning, some forming a picket line outside the Mugamma, a huge government complex that is the center of Egypt's sprawling bureaucracy.

"We managed to convince many of the employees not to go to work," said Ghada Shahbender, a human rights activist who has been protesting since the start of the January 25 uprising.

Protesters have vowed to stay in the square until the demands of the revolution are met, including an end to military trials of civilians, the dismissal and prosecution of police officers accused of murder and torture -- before and after the revolution -- and open trials of former regime officials.

After nearly two weeks of mounting tension marked by clashes with police, Prime Minister Essam Sharaf on Saturday pledged to meet the demands of the protesters with a series of measures.

Sharaf said he "issued direct orders to the interior minister to stop all police officers accused of killing protesters from working," in an address broadcast on state television.

He also "ordered the creation of a panel to review the trials (of those accused of) killing protesters and of corruption as soon as possible," without waiting until after the judicial summer recess.

The premier said he has asked the social solidarity ministry to look into the portfolios of health, education, and salaries and pensions.

But the speech was slammed as empty rhetoric with vague promises and no deadlines, with many activists accusing the prime minister of being too weak in the face of the ruling military council.

"We are still asking for no military rule of the country, and no pressure from the military on the judiciary and the media," said human rights activist Dina Mohammed, 24.

"The longer we stay (in the square), the more they respond," she told Agence France Presse.

The Supreme Council of the Armed Forces, which took power after Mubarak stepped down, has angered protesters who accuse it of using Mubarak-era methods to stifle dissent.

Some complained of the piecemeal approach.

Sharaf "deals as if the problems were a water leak and instead of closing the tap, he tries to collect the water with his hands," said Magdy Mussaad.

"I didn't use to come to Tahrir often, but now I feel like I have something precious and it is being taken away," he told AFP.

The prime minister "only responded to one demand," said Riham Abdul Salam, 23, a student of film, referring to the sacking of police officers accused of murder.

"We are also asking for the release of civilians held by the military, an increase in salaries and we want the ex-regime ministers out," she said.

On the outskirts of Cairo, around 300 protesters cut off the main highway linking the capital to the canal city of Suez, threatening more measures if the demands of the revolution are not met, a security official said.

Egypt stocks fell 1.67 percent on Sunday amid the continued political tensions, with the main EGX-30 index closing at 5270.86 points.

Dozens of former regime officials, including ministers and a handful of police officers, are currently on trial on charges ranging from corruption to murder.

Mubarak, who is in custody in a hospital in the Red Sea resort of Sharm el-Sheikh, is to face trial along with his two sons Alaa and Gamal on August 3.

But protesters have criticized the handling of the legal proceedings, demanding a transparent and thorough process for the sake of justice, not revenge.