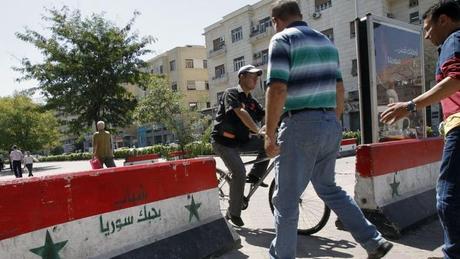 Two mortar rounds hit Syria's central bank in the capital Damascus on Wednesday causing damage, a witness told Agence France Presse, but there were no reports of injuries.

The projectiles struck the building at around 7:40 am (0440GMT), the witness, a resident of a central Damascus neighborhood, told AFP.

"One hit the roof of the building and the second hit the garage," the resident added.

The extent of the damage to the bank was unclear, but there were no initial reports of injuries in the attack and traffic was moving normally in the area on Wednesday morning.

Syrian rebels seeking to overthrow the government regularly target the center of Damascus with mortar fire from rear bases on the outskirts of the capital.

The bank, in Damascus' Sabaa Bahrat Square, has been targeted in violence before.

In April 2012, it was hit by a rocket propelled grenade attack, that caused damage but no injuries.

The bank was also affected by a huge suicide car bomb that detonated near Sabaa Bahrat Square in April 2013, killing at least 15 people and causing extensive damage to the surrounding area.