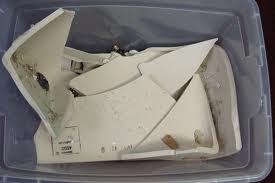 A New York man was seriously injured when a toilet exploded in his face after he pulled the handle to test the water pressure in his Brooklyn apartment.

The 58-year-old information technology specialist is now so fearful that he uses a rope to flush the toilet from behind the bathroom door at a safe distance.

"Those fears are part of his damages," said his lawyer Sanford Rubenstein. "Clearly toilets are supposed to flush, not explode."

Three other tenants were also injured by what the Daily News website dubbed "the porcelain bomb."

The website said Pierre was briefly knocked unconscious and covered in blood by the explosion on October 2 in Brooklyn, an increasingly well-heeled part of New York.

Rubenstein said a lawsuit would be filed against the management company of the building so that a jury could decide how much compensation Pierre should be paid.

The full cost of his medical bills and whether he needs plastic surgery are not yet known, Rubenstein said.

"Obviously there is a serious problem in the building," the lawyer told AFP.

The water had been turned off that day to allow for maintenace work in the 16-story building, which was built in 1964 and contains 275 apartments.

Theresa Racht, a lawyer for the co-op board, told AFP that it appeared to have been a freak accident.

"This is a horrific incident. Everybody feels terrible that such a thing could have happened," she said.

"It certainly makes me think twice about flushing the toilet when the water's been turned off."

She said four toilets in the building exploded but that no particular evidence of wrongdoing had yet been found.

"It has never happened before and certainly nothing has happened since," she said.

"The only conclusion anybody has reached -- and they're still investigating -- is that there was a buildup of air pressure in the pipes so that when it came back on, the pressure was just pushed through the pipe and caused the explosion."

"This could be very well what we call a true accident."

New York man Hit by exploding toilet, cops say they have nothing to go on.