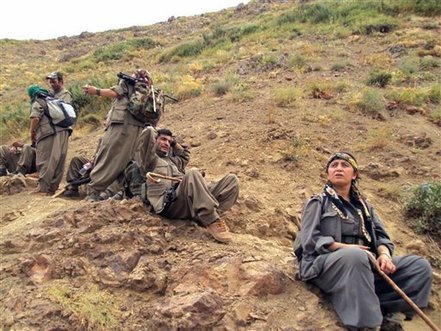 The authorities in Iraqi Kurdistan have arrested three men allegedly involved in an attack that killed seven people last month in the autonomous region's capital Arbil, officials said on Saturday.

"We were able to arrest... terrorists who have a direct relationship with the terrorist operation that targeted Arbil," the region's national security adviser, Masrur Barzani, told a news conference near Arbil.

On September 29, militants attacked the headquarters of the Kurdish asayesh security service in Arbil with suicide bombers, gunfire and car bombs, killing seven of its members and wounding more than 60 people.

Subsequently claimed by an al-Qaida front group, the attack was the first of its kind to hit Arbil since May 2007, when a truck bomb exploded near the same headquarters, killing 14 people and wounding more than 80.

In a statement claiming the attack, the Islamic State of Iraq and the Levant said it was in response to Kurdish region president Massud Barzani's alleged willingness to provide support to the government in Baghdad and to Kurdish forces battling jihadists in Syria.

While Nuri said generally that the Kurdistan region was cooperating with Iraq's federal government in fighting terrorism, he did not specify which forces made the arrests, or where they did so.

According to Nuri, the men bought two cars from Kirkuk, another northern Iraqi city, and drove them to the Mosul area, where they were rigged with explosives.

They also supplied three suicide bombers with weapons and explosives, and Yunis remotely detonated one of the car bombs during the attack, Nuri said.

An earlier statement from the asayesh put the number of suicide bombers at six -- two who were able to detonate explosives and four who died in clashes.

The reason for the discrepancy in accounts was not immediately clear.

While Iraq's Kurdish region is usually spared the near-daily violence plaguing the rest of Iraq, it has become increasingly embroiled in the bloody conflict raging across the border in Syria.

Clashes between Kurdish forces and jihadists trying to secure a land corridor connecting them to Iraq pushed tens of thousands of Syrian Kurds across the border, seeking refuge in Iraqi Kurdistan.

Barzani threatened to intervene in the Syrian conflict to protect Kurdish civilians, although officials have since backtracked on his remarks.