3 Arrested after Clash between Rival Gunmen in Beirut 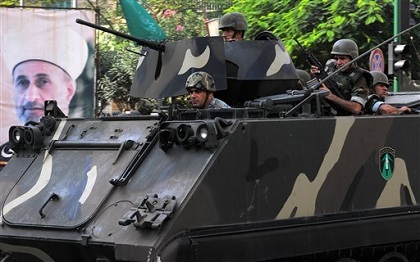 The army said it arrested on Tuesday three suspects in connection with a gunfight between rival gunmen in the Beirut neighborhood of Tariq al-Jedideh.

The army communique did not identify the gunmen but said that they exchanged gunfire with light arms during a dispute near al-Makassed hospital at 9:15 am.

It said the army drew a tight dragnet in the area and raided several locations that led to the arrest of three people.

The military is pursuing the rest of the suspects to apprehend them and refer them to the judiciary, the communique added.

The state-run National News Agency described the dispute as “personal.”

Some media reports said however that the parties involved in the clash included members of Hizbullah's Resistance Brigades and armed men from Tariq al-Jedideh.

They did not provide details as to why the two sides fought.

But LBCI TV said the dispute was between supporters of Grand Mufti Sheikh Mohammed Rashid Qabbani and parties that oppose him.

It said a man identified as Abu Ali Shamleh, an official who is in charge of groups allied with Hizbullah, had opened fire and used hand grenades during the clash.

hizbushaitanis trying desperately to have a wider foothold in Beirut to create more strife.

keep up the constant, yet inconsistent finger pointing at HA, regardless of facts ya geha. with time it became background noise, nobody listens to it anymore.

Armed hapless unemployed testosterone filled, sexually repressed young men.
This is what you get.

The solution:
1-get them jobs. For that, you need investors, hence HA out. 2- get them girls. For that, legalize prostitution and quit the moralizing laws.

what a bunch of ignorant good for nothing thugs.

disbanded but not disarmed. the filth remains intact

i figured samy. i was being sarcastic because lebanese r now a minority in their own country.

"LBCI TV said the dispute was between supporters of Grand Mufti Sheikh Mohammed Rashid Qabbani and parties that oppose him". Yalla ya ouledde, rouho ooh khabtou baad. It is OK, since you are doing for Allah, Islam, grand mufti this, medium mufti that. Disgusting people.

Samy your pity is misplaced. I live here and all I hear in naharnet is like a different planet. I feel pity for those poor folks who were uprooted and had to emigrate.

Texas. Sorry to break it to you buddy. But the sidon brigades disbanding news was denied later.
Yours is wishful thinking. HA will disarm when iran says so. Not before.