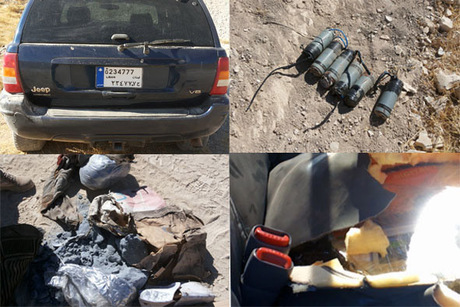 A booby-trapped car seized Monday by the army in Dahieh contained around 50 kilograms of explosive material, an army statement said, as President Michel Suleiman hailed the military institution for its achievement.

The vehicle turned out to contain “around 50 kilos of explosives: three landmines, six anti-vehicle grenades, a quantity of TNT, and some 20 kilograms of aluminum powder that is mixed with yellow sulfur and electric fuses,” according to the statement.

“It turned out that the aforementioned car had been sold several times in the past,” the statement added.

The Army Command noted that investigations are ongoing under the supervision of the relevant judicial authorities “with the aim of identifying those involved in this criminal act,” urging citizens in all Lebanese regions to immediately report any suspicious activity.

Meanwhile, President Suleiman hailed the army for seizing the car and lauded its efforts.

“Eid (al-Adha) for the officers and soldiers takes its true meaning from their sacrifices for the sake of the country and civil peace,” Suleiman said, slamming “the plots against the innocent citizens that are aimed at undermining the stability that we are all seeking.”

On Monday evening, the army said an explosive-rigged Grand Cherokee was found in the Beirut southern suburb of al-Maamoura and that military experts dismantled the bomb after cordoning off the area.

At least 53 people were wounded in a car bombing that rocked the Beirut southern suburb of Bir al-Abed on July 9 while 27 people were killed and more than 280 injured in a bomb attack in the Rweiss suburb.

Army troops and security forces deployed in Beirut's southern suburbs – a Hizbullah stronghold -- in September, taking over checkpoints set up by the party in the wake of the two massive bombings.

And the cheapest. Falsifying identification documents is a breeze anyway.

If it was stolen, the security forces would have definitely been on the lookout and therefor more likely to foil their plans; falsify documents/buy the cheapest car you can get/fill it with anything you have lying around and send it in.

1. there is no mention as to when the car was bought
2. there is no mention as to how long a time a car is needed to be rigged by takfiris/terrorists/etc.
3. there is no indication that intelligence agencies can't rig a bomb in under 48 hours the way this has been done or in general.
4. I do not know how long a time it takes for a car theft to be reported
5. I'm more or less sure the deployment in and around HA strongholds would be some of the first to be noted by such relevant things

6. there is no indication that terrorists cannot take more than 48 hours to rig bombs, which is possible in this case due to logistics probably. etc.

the syrian secret services r behind it.... with the help of some hizballa agents

anonymetexasusa, still, it can't be said it wasn't a terrible car and hence chep, and neither could it be said that they didn't use the same technique as the Tripoli bombings since apparently they have a handful of defected intelligence officers/colonels/general on their side for help.

I'm also a bit surprised the mines didn't go off while they were being transported on the terribly bumpy roads they drove on hah.

all a hezbi comedy to make people forget about tripoli.....

stupidest argument ever. you may have a fish's memory, forgetting an event each time a new one happens, but most people have memory.

then, if u want this 2 be done 2 foreigners, other countries should do this 2 lebanese abroad. DNA samples can be tampered with.... rIsKy BuSiNeSs

Personally, I think an intelligence agency was behind this. They've been doing it for years, we've just recently had the will power to combat it... Or maybe it's just because they're targeting hizballah areas now too.

Either way, like they said before, the same people are behind both the dahyi and tripoli blasts...

And btw I do believe that Qaida is also run by intelligence agencies. The jihadists/tikfiris are trained and funded by politicians and kings.

Hizballa labels itself as jihadi. So do the FARC-

anonymetexasusa, yeah I know. What I said regarding the mines was that I was surprised how the mines didn't explode while they were being transported through the bumpy roads, because if you've been to Lebanon lately, they're in terrible, terrible shape. I also know they were probably disabled; let's not get too pedantic.

anony any terrorist organization can appoint people to buy and sell one another it does not need such sophisticated networks. however if you read it in arabic it says that it contained 2anebel 3an2oudiyyeh as well and who is the best producer of suck weaponry??? Israel :)

A lot of missing info in the article.
1- how was the car found? I inferred from the army statement that neighbors saw suspicious activity and reported it. But this is not clear.
2- Was the car rigged to explode or was it merely transporting explosives to another region. Again, I think it was rigged to explode, but we cant be sure.
I am sure that some military secret service types are right now scanning CCTV feeds. I am in principle against the death penalty. However in our case, I think we should declare martial law and allow public hanging of terrorist acts, especially for syrians and pals terrorists.

This is a fake car bomb, planted in Hezollahland in order to get sympathy, as if to say........ "Look! We are targeted too!"

They are using this to justify their war crimes in Syria.

And they are using this to somehow try to show that M8 are targeted by terrorists, not just M14 areas. Which is a big lie because we know who is behind all the bombs and assassinations.

Why are they so good at defusing bombs before they explode in Hezbollahland (save for one exception)??

See the article below to see how many other crimes were not stopped nor solved against M14 targets......

ROTFL Paz. I forgot it's sponsored by kings and princes of the middle east.