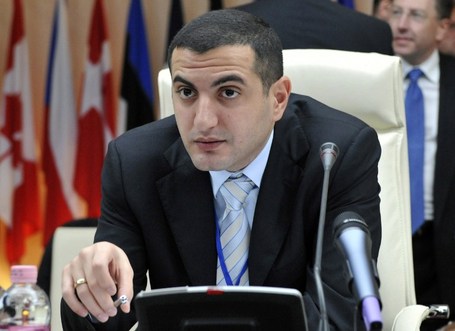 Davit Kezerashvili, a close ally of outgoing president Mikheil Saakashvili, was detained Monday in Paris and is set to face an extradition hearing to determine whether he should be sent back to the Caucasus nation.

Georgia's ambassador to France, Ekaterine Siradze-Delaunay, said Kezerashvili was arrested on Monday and placed in custody in Aix en Provence, about 30 kilometers (20 miles) north of Marseille.

"I do not know when he arrived in France or whether he resides in France," Siradze-Delaunay told Agence France Presse.

Kezerashvili, who also headed the financial police, was charged in January with taking a bribe of $12 million (nine million euros) to facilitate alcohol smuggling in the ex-Soviet nation.

The case against Kezerashvili was one of a string of investigations launched against Saakashvili allies after his party lost October 2012 parliamentary polls to a coalition headed by billionaire Prime Minister Bidzina Ivanishvili.

Saakashvili, who will leave power when his second term ends after elections later this month, has dismissed the investigations as a political witch hunt against himself and officials from his government.