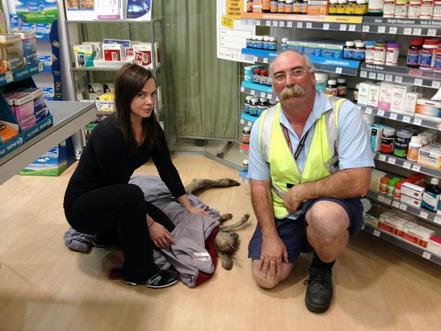 Australian police had to lock down part of Melbourne Airport Wednesday after a kangaroo bounced into the terminal and surprised passengers shopping in a pharmacy.

Wildlife rescue volunteers were called in to tranquilize and capture the distressed eastern grey male, which had been hit by a car on his way to the building that services both international and domestic flights.

"Cyrus, as he has been aptly named after one of the helpers on the scene, will be assessed by a vet following his ordeal," Wildlife Victoria said.

Australian comedian Julia Morris broke the news on Twitter, where photographs began circulating of the marsupial in the skincare aisle of the terminal's pharmacy.

"Ok, so I'm at Melbourne airport & a KANGAROO has just jumped into the chemist," she tweeted, with the hashtags #notajoke, #soundslikeajoke, #mustneedaprescriptionfilled.

Australia's national airline, Qantas, features one of the animals on its livery and is known as the "Flying Kangaroo", prompting jokes on social media sites.

Police locked down the chemist while rescuers were called, and Wildlife Victoria said its emergency response team sped to the terminal where "the kangaroo was tranquilized and captured safely".

The terminal is located close to bushland known to be frequented by kangaroos and although the tarmac is guarded to ensure the animals do not hop into the path of an aircraft, staff said kangaroos occasionally made their way into the site's buildings.

In January one of the creatures led police on a chase through the airport's multi-story carpark before it could be sedated and caught, following a similar incident in October 2012.

he must be a spy, just like the israeli eagle :p