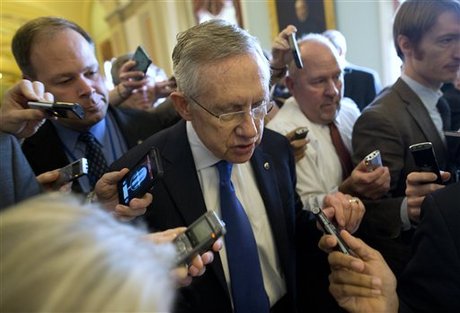 Republican and Democratic leaders in the U.S. Senate struck an agreement Wednesday to end a fiscal impasse, hours before Washington hits its debt limit, a senator said.

"I understand that they've come to an agreement," said Senator Kelly Ayotte, a Republican from New Hampshire.

Senate Majority Leader Harry Reid and Mitch McConnell, the top Republican in the senate, led the negotiations to avert a potentially devastating debt default after an earlier bid collapsed in a bitterly divided House of Representatives.

"I hope that we're nearing the end of this ordeal, this impasse which never should have happened in the first place," said Senator Susan Collins, a moderate Republican who has led efforts to broker a compromise.

Details of the latest agreement were not known, as lawmakers went in to conference to learn what the leaders had agreed to.

Senate approval of the deal still would have to be ratified by the Republican-controlled House, where a core Tea Party faction has until now vehemently resisted compromise.

The move comes with a midnight deadline. On Thursday the United States is expected to hit the limit of its $16.7 trillion borrowing authority, raising the threat of a default with potentially catastrophic effects on the world economy.

Meanwhile, President Barack Obama urged Congress later on Wednesday to move swiftly to approve the deal to reopen the U.S. government and remove the threat of a potentially devastating default.

White House spokesman Jay Carney said Obama was grateful to the leaders of the Senate for working together and wanted lawmakers now to ensure "the government reopens and the threat of default is removed."

"We obviously hope that each house will be able to act swiftly because we're already on Day 16, I think ... of a wholly unnecessary shutdown of government with real consequences for real people," Carney added.

"And we are obviously very close to the point beyond which the United States Treasury no longer has the authority to borrow new money to meet our obligations."

Actually they are going to get back pay once the government re-open so basically this was a paid vacation for them.

@thefact, I pray the GOP has a fair and open mind approach to what was agreed upon because they have lost the health care fight and they need focus on what's next. On the other hand I hope they have the courage to stand their ground if the deal does not meet a minimum standard such as the affordable care act whether good, bad or indifferent applies to everyone equally, including government employees. The government has no right to pick and choose who the law applies to. Republican must have the courage to understand that a patient can't go from invasive extreme surgery to good health right after the surgery. It takes a long time to recover from a 17T debt. If that means shutting down the government and and refusing to increase the debt limit then that is what we have to have the courage to do.

@tonyfarris, You say the Tea Party is against the government? Well YES and NO, they are against big government as well as a tax and spend Senate and House. Definitely they are for a small government that rejects the idea of cradling free-loaders out for a hand out by demanding over-taxing those of us who earn an honest living with our blood, sweat and tears. Against the people? Well a resounding NO. They are against lazy "give me something for nothing" type elements in our society. Tony if you are a Democrat and a liberal, that is your right and I respect that but you can't paint the rest of us with an opposing view as against the people because we are the people.

U guys r so lucky 2 be Americans

finally !!!! there was going to be a world crisis if on the 17th nothing gets better !

@Haile, if you mean a manufactured and phony crisis, then yeah you would be right. The US generates enough tax revenue to pay down both the principal and interest on our loans. Financially speaking, there would be no crisis except for a phony one in order to scare people into compliance.

¿How about life after love Haide?

@those who pray and wish for America's demise...please don't hold your breath. However, if you truly believe otherwise, then you really are out of touch with reality.

if the USA collapse then the whole world too... so those wishing for its collapse will be flushed out too! have they ever thought of that? LOL

¡It must feel like Wat the rat is experiencing in Dahya!