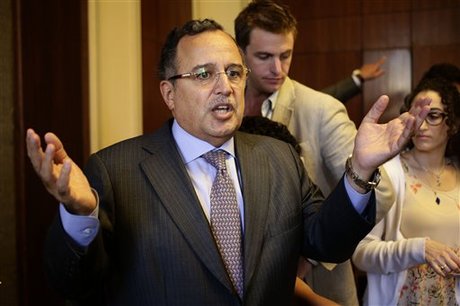 Egypt's foreign minister acknowledged in comments published Wednesday that relations with Washington were in a "delicate" phase after it suspended some military aid in response to a July 3 coup.

Nabil Fahmy said the U.S. administration had overestimated the amount of leverage that its aid dollars bought it over the policies of the interim government installed by the army after it overthrew elected Islamist president Mohammed Morsi.

"We are right now in a delicate phase reflecting turmoil in the relationship and whoever says otherwise is not speaking honestly," Fahmy said in an interview with state-owned daily Al-Ahram.

Fahmy said Washington was wrong to assume that its October 10 decision to suspend deliveries of major military hardware and cash assistance of $260 million would influence the interim government's policies.

He blamed the hiccough in relations on the dependence on U.S. aid of the regime of Hosni Mubarak which was ousted in 2011 after three decades in power.

"We chose the easy option and did not diversify our options... this led the US to wrongly believe that Egypt would always follow its policies and aims," Fahmy said.