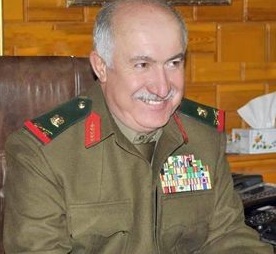 Rebels have killed a top intelligence officer in the eastern province of Deir Ezzor, Syrian state media said on Thursday.

"Major General Jamaa Jamaa was martyred while carrying out his national duties to defend Syria and its people and pursuing terrorists in Deir Ezzor," state television said in a breaking news alert.

Jamaa was head of military intelligence in the province, where the regime has been battling armed opposition fighters seeking to overthrow President Bashar Assad.

State media gave no immediate details on where in the province Jamaa was killed or how, but jihadist forums said he died during clashes with jihadist fighters in the city of Deir Ezzor.

Rami Abdel Rahman, director of the Syrian Observatory for Human Rights NGO, said initial reports suggested Jamaa had been shot by a sniper in the Rashdiya district of Deir Ezzor city, but there was no confirmation.

The group also reported fierce fighting between regime troops and rebels in several parts of the province, including the city, which is the largest in eastern Syria.

Jamaa was one of Syria's top security officers in Lebanon during Damascus's military deployment in the country between 1976 and 2005.

He was interrogated over the February 2005 assassination of former premier Rafik Hariri though he was not charged in connection with his death.

In 2006, the U.S. Treasury Department announced it was blacklisting him and another Syrian general for their role in supporting "terrorist groups" and over the presence in Lebanon.

He is believed to be from Jableh, a town in coastal Latakia province, a stronghold of the Syrian regime.

It is with deepest sorrow, The Islamic Secular Resistance in Lebanon announces the martyrdom of the Noble General Jamaa Jamaa while performing his humanitarian duties in Syria along with Mustapha Badreddine. His contributions to the resistance and his battlefield heroics against the zionist enemy in the Golan Heights and the streets of Lebanon are but a few of his achievements. Not only has the resistance lost a great ally, a true patriot, but an endearing human. May the Lord bless his innocent soul and grant him peace and tranquility in his seven heavens. What a sad day......

Sorry, but I fail to understand jerks like you? What contribution did you make to the article?

You uneducated and ignoant traitor- you should be tried fr treason.

He was shot with a single shot to the head?:)) The good news is that he is dead. I hope Bashar and Nasrallah join him soon.

In the end, I'll be the only 1 laughing

what do you mean by "here".... Australia you mean? you fake impostor!

A few people so far don't agree this thug was a criminal:))) Lets see by the end of the day how it turns out. The 5th brigade has a lot of work to do. I am happy this thug is dead. I would have hoped he suffered more for all the misery and deaths he caused in Lebanon and Syria.

Numerous unconfirmed reports after Hariri’s death alleged that Jamaa had been involved in the 2005 assassination.

Jamaa—who was the head of Syrian Military Intelligence in Beirut under Syria’s Rustom Ghazali—was sanctioned in 2006 by the US Treasury Department for his role in plotting Syrian intelligence operations in Lebanon.

Maybe he was liquidated by a regime sniper so the STL investigations would not see the trail leading to the top of the pyramid.

¡God bless the Syrian patriot who got him!

Prime.... it sounds like a regime job to me.

I'd much rather trust the FARC than these shabi7a killaz.

All racists sound the same: they all seem like they read comic books and then award themselves Ph.D's.

I don't see the national symbol on your terror party's flag. ZIP it

you don't need to act. you are

4 sure, roar is high 2day. Pills, weed, or alcoholic beverage?

Well well, I can sense it!
My vision of the world we r living is very clear. Seeing hizballa shabi7as on 1 hand, and nusra cannibals on another hands does make u need 2 drink every now and then in order 2 cope w/ the daily horror.
I'm soory 2 disappoint u, I'll never pick hizballa nor recognize them as patriots because they r the Lebanese equivalent of nusra brigades.

They r the impostors, the foreigners.... The highway as u say is 4 them.

LOL STL is approaching and rebels are very convenient excuse to take him off...
little by little the baath regime is taking off those implicated in hariri's murder.... and it will continue!

you don't understand what i have written it seems so obsessed you are by qaeda nusra and co...

let me repeat: i said that the syrian regime killed him, not the rebels... like the regime killed those implicated in hariri's murder... got it now?

and for roar the smart baby: read the news and you'll know the date, iliterate aussie....

sure southern sure... we know you know everything... good for you

"danger of being permanently quarantined."

great it will isolate me from your stench....

We have over a Million of them.... Plus thousands of their spies that never left!

yeah you must hand over the baton. It's ok we understand....

R u in Sidney? U must be sniffing the bad contaminated air, lack of oxygen does this brain.... Chico.

No you don't need back up. Your brigade of voters just arrived.

that s how people the size of a peanut play....

Roar and inside man: The only cleaning up being done is the extraction of all who had anything to do with the Hariiri assassination. It's reached a stage where all the IT has to do to exterminate someone is name him as a collaborator our has knowledge about the assassination, and sure enough HA and Bachaar will do what's necessary. As for you two pair of bananas, the trial will take place and your tone will change to justifying the murder because it's not a matter of right or wrong. In your hopeless arrogant cases, its always I am always right and never wrong. And Roar "Tahya Soriya".

Lol- this creep was martyred in his bid to leave one man in power against millions of people. Rot in hell

Mr the_roar, after 26 meaningless comments you have managed to rivet inside-man and boar the rest of us.