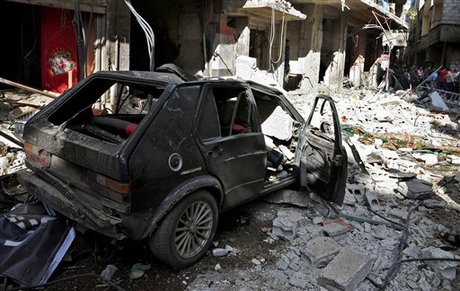 A suicide car bombing outside a pro-regime suburb of Damascus and fighting that followed killed 16 Syrian soldiers Saturday, as the U.N.-Arab League envoy began a push for peace talks.

Meanwhile, the United States said children were starving to death in besieged residential areas of the capital and demanded the regime allow aid convoys in.

State media blamed the early-morning blast at the entrance to the mixed Christian-Druze suburb of Jaramana on "terrorists," the regime term for rebels.

The Syrian Observatory for Human Rights said a suicide bomber from the Al-Qaida-linked Al-Nusra Front detonated an explosives-packed car at the checkpoint between Jaramana and rebel-held Mleha.

Heavy fighting followed, with rebel mortar fire hitting Jaramana, said the Britain-based Observatory, which relies on activists and medics on the ground.

Observatory chief Rami Abdel Rahman said the southeastern suburb is a key pro-regime area and will be exposed if the rebels overrun the checkpoint.

He said they had almost seized it in he fighting, but that government aircraft had launched four strikes to try to force them back.

One resident said the intensity of fighting was "unprecedented" since the conflict erupted in March 2011.

"It is very violent; we can hear automatic weapons fire, mortar rounds, bombardments," he told AFP by telephone.

The conflict, which erupted after President Bashar Assad launched a bloody crackdown on Arab Spring-inspired democracy protests, is believed to have killed more than 115,000 people.

Millions more have been forced to flee the country and hundreds of thousands are trapped by the fighting.

There were "unprecedented reports of children dying of malnutrition-related causes in areas that are only a few miles from Bashar Assad's palace in Damascus," said State Department spokeswoman Jen Psaki.

"The regime's deliberate prevention of the delivery of lifesaving humanitarian supplies to thousands of civilians is unconscionable," she said. "We call on the Syrian regime to immediately approve relief convoys into these areas."

The call came as U.N.-Arab League envoy Lakhdar Brahimi was to arrive in Cairo at the start of a regional tour aimed at paving the way for peace talks.

World powers hope to convene a peace conference in Geneva next month but prospects for it remain unclear, with Syria's opposition divided and due to vote next week on whether to take part.

Assad's government says his departure from office cannot be on the table, while the opposition insists he cannot remain in power.

In Geneva, spokeswoman Khawla Mattar said Brahimi would meet Egypt's foreign minister as well as the head of the Arab League.

Brahimi is also expected in Syria and in Damascus ally Iran.

Separately, U.S. Secretary of State John Kerry will head to Europe next week for talks on Syria. He and other envoys from the "Friends of Syria" group will meet the Syrian opposition in Britain Tuesday to review progress towards convening the conference.

The National Coalition, Syria's main opposition bloc, has said it would hold internal discussions next week to decide whether to do so.

The Syrian National Council, a key Coalition member, has already said it opposes the talks and threatened to quit if the umbrella group takes part.

For months, world powers have been pressing for a negotiated solution, and the renewed push for talks comes after a September deal under which Syria agreed to turn over its chemical arsenal for destruction.

Inspectors from the Organization for the Prohibition of Chemical Weapons said Friday they have visited 14 out of more than 20 sites in Syria.