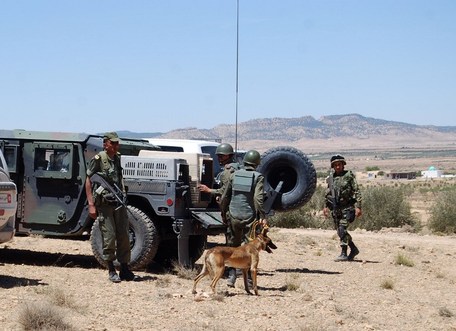 The nine were killed in the Mount Taouyer area of the Beja region, some 70 kilometers (40 miles) west of Tunis, spokesman Taoufik Rahmouni was quoted as saying by the official TAP news agency.

Another ministry spokesman had earlier said troops had captured one member of the group during the operation to hunt down a cell of some 20 suspected jihadists blamed for the killing of the policemen.

Since the 2011 uprising that sparked the Arab Spring, Tunisia has seen a rise in attacks by jihadist groups suppressed by former dictator Zine El Abidine Ben Ali.

Some 15 soldiers and police have been killed since December as they track militants allegedly linked to al-Qaida along the border with Algeria, but Saturday's operation was the first of its kind in Beja, which is much closer to the capital.

The defense ministry has said it lacks the resources to combat militant groups and has struggled to contain them.

On Friday, in a sign of rising frustration over the costly fight against jihadists, protesting security forces drove Prime Minister Ali Larayedh and President Moncef Marzouki away from a memorial service for the policemen killed in Beja.

Tunisia has been locked in a political crisis since July, when prominent opposition lawmaker Mohammed Brahmi was shot dead by suspected jihadists, in circumstances similar to the murder of another opposition MP, Chokri Belaid, six months earlier.