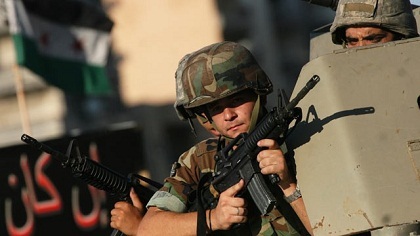 Gunfire exchange took place in the northern city of Tripoli on Sunday evening amid heavy military deployment in the area, the state-run National News Agency reported.

"Gunfire was heard in the Tripoli neighborhoods of Bab al-Tabbaneh and Jabal Mohsen,” the NNA elaborated, pointing out that armed men were present in the region.

The same source added that a bomb was hurled at the stream of the nearby Abu Ali river.

Later, the NNA said an Inerga-type grenade was hurled at Tripoli's Syria Street.

"The army has since strengthened its deployment and went on alert in the northern city.”

On October 11, an army soldier was wounded as sniper gunfire erupted in Bab al-Tabbaneh, Jabal Mohsen and Syria Street in Tripoli.

Quoting the Arab Democratic Party, the main political and armed group in Jabal Mohsen, LBCI television had said "the unrest erupted after an Intelligence Bureau unit arrested a young man from Jabal Mohsen called Youssef Diab, which prompted residents to protest and fire shots in the air, the thing that provoked Bab al-Tabbaneh's residents and led to clashes."

"The arrest of the young man in Jabal Mohsen is an attempt to eliminate the Alawite sect and it will not go unnoticed and we demand that the detainee be handed over to the army," LBCI quoted the party's leader Rifaat Eid as saying.

Diab, along with five other suspects were charged on Monday in connection with the August bombings of two mosques in Tripoli.

The charges include the formation of an armed gang for the purpose of carrying out terrorist activities and the bombing of al-Taqwa and al-Salam mosques on August 23.

Among the seven suspects were three already detained men who are Youssef Diab, Anas Hamzi and Hussein Jaafar.

The Arab Democratic Party is a tool of the Assad's, it should be outlawed.

Good morning Mr Mowaten is there anything linking mustahbal or the Saudi's to the two car bombs in Tripoli? The bad publicity falls on Hizbullah for assisting or turning a blind eye on their Axis partner Assad's terrorist actions in Lebanon.

what about hezbis supporting the regime that plants bombs in lebanon? out of patriotism?

and you support them still! so next time sweep in front of your own door instead of lecturing others! LOL

funny you'd say that peace, you guys have been supporting those who planted bombs in dahiyeh, throwing rockets on baabda, planting roadside IEDs in the bekaa, firing missiles on the hermel.. but sure, keep giving us lessons of patriotism.
FYI, if the evidence confirms the charges against the Arab Democratic Party, then it would be the Arab Democratic Party who would be guilty, not Assad, and even less Hezbollah. So learn to differentiate, it's not just because they all fit in your "i dont like them bag" that they all are guilty.

"So learn to differentiate" i do, but you like to jump to conclusions without even reading my posts. i said your militia supports a regime that bombs lebanon... which makes you defend the bombings here unless we see you criticize the baath regime... but you always seem to find it excuses! thank you syria is your motto....

and M14 does not support those planting bombs only in your M8 propaganda... M8 on the contrary OPENLY praises assad that plants bombs here... see the difference? so your learn-to-differentiate lecturing of yours best applies to you...

and i have NEVER seen you criticize bombings on akkar by your syrian friends... i guess they are not lebanese enough to your M8 taste...

learn to read my comments before answering with your nonsensical rant.
PS: if you never saw me condemning the tripoli bombing you either never read my comments, are a liar, or have a selective memory problem.

lol... you never criticize bombings of akkar by the syrian army or when you do it is to find excuses lol ... that is a fact...
2/ if you condemn bombings in tripoli then why are you still supporting the regime at its origins? LOL pure hypocrit you are that's why....

see where the nonsense is? lol

ooh you mean the shelling? once again, you're distorting my comments to fit them in your narrow views.
if you're speaking of the few random shells that fell on akkar, i did condemn them, but i said we cannot know they were fired by the syrian army.
i remember saying it served no objective whatsoever for the syrian army, whereas the rebels are desperate to get lebanese to come fight for them. throwing a few shells on akkar and blaming on the syrian army creates anger and serves that purpose. so i'm suspicious of the immediate accusations and verdicts issued by the internet mob.
that is the nuance that you are mentally incapable of understanding.

If anybody else is fedup w/the alawite and Syrian conflict in lebanon raise ur hand.

I raise my hand.

how offensive >>> the LAF is the only legitimate armed force Lebanon. your syrian|iranian|hezbolian colleagues are using bronze era terror tactics.