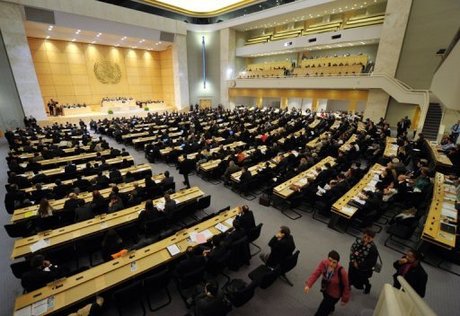 Saudi Arabia came under fire again Monday over human rights abuses, including the death penalty and discrimination against women, days after refusing a seat on the United Nations Security Council.

Diplomats at a U.N. review of Saudi Arabia's human rights record condemned the oil-rich kingdom's failure to abolish a system requiring women to seek permission from male relatives to do basic things such as leave the country, and also criticized a continued ban on driving for women.

Saudi Arabia should "put an end to the system of male guardianship for adult women," the representative for Switzerland said, echoing a recommendation made by many of the 104 states that took part in the Universal Periodic Review of the country before the U.N. Human Rights Council.

The review came days after Saudi Arabia rejected a seat on the U.N. Security Council, saying the diplomatic body had failed in its responsibility towards the Arab world.

Bandar bin Mohammad al-Aiban, who heads Saudi Arabia's Human Rights Commission and led the country's delegation in Geneva, said the country had made progress since its first such review in 2009.

He said Saudi Arabia had for instance allocated a minimum of 20 percent of seats on its Shura Council -- an advisory body that can propose law changes to the king -- to women.

"Tangible progress has been achieved on a daily basis," he said.

"Many countries have problematic records, but Saudi Arabia stands out for its extraordinary high levels of repression and its failure to carry out its promises to the Human Rights Council," Joe Stork, Human Rights Watch deputy director for the Middle East, said in a statement.

"Saudi Arabia's previous promises to the U.N. have been proven to be nothing but hot air," said Philip Luther of Amnesty International, condemning an increase in the arbitrary detention of activists.

Diplomats hailed some progress, including Saudi Arabia's decision to join several international human rights conventions and steps to combat corruption, but expressed deep concern over Saudi Arabia's continued use of the death penalty, including for crimes committed by minors.

The country needs to "end the practice of executing children," the Norwegian representative insisted, as others demanded a moratorium and eventual abolition of all death sentences.

The kingdom has executed 69 people so far this year, according to an Agence France Presse count.

Diplomats also urged Saudi Arabia to do more to protect migrant workers. Because of a system barring them from switching employers without permission, migrants often find themselves vulnerable to abuses including forced labor.

A report based on Monday's review is scheduled to be published Wednesday and adopted Friday.

The review comes just over three weeks before Saudi Arabia's bid to secure a seat on the 47-member rotating U.N. Human Rights Council.

"Saudi Arabia's record of repression and of breaking its promises to improve its human rights practices raise serious questions about its fitness for membership in the Human Rights Council," said Stork of Human Rights Watch.