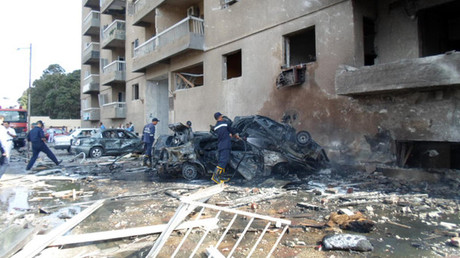 An al-Qaida-inspired group operating in the Sinai Peninsula claimed Monday a car bombing outside a military building in Egypt's Suez Canal city of Ismailiya which wounded six soldiers.

The attack on Saturday destroyed part of the military compound's wall and set fire to several cars in the area. A second car bomb was also found in the area but it was defused.

"We, Ansar Beit al-Maqdis, announce that we are responsible for the attack against the building of military intelligence in Ismailiya (carried out) with an aim to clean Egypt of dens of criminals and collaborators," the group said in a statement posted on jihadist forums.

"We advise our people in Egypt to stay away from any army and police building as they are legitimate targets of mujahideens."

Ansar Beit al-Maqdis had also claimed a car bombing in September that targeted the convoy of Egypt's interior minister Mohammed Ibrahim. He was not hurt in the attack.

The group has previously claimed attacks against neighboring Israel.

More than 100 policemen have been killed across Egypt in attacks and clashes since then.

The military has been conducting an extensive operation in the restive Sinai Peninsula, east of the Suez canal to crack down on Islamist militants.