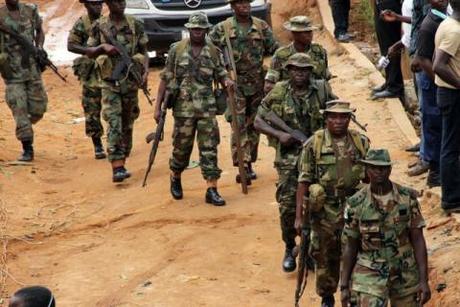 Nigeria's military said Tuesday it killed 37 suspected Boko Haram fighters in a ground and air assault on an insurgent camp in the northeast, the epicenter of the Islamist group's four-year uprising.

The military recovered arms and ammunition and destroyed vehicles and motorcycles belonging to suspected Islamists, he said.

"The operation which commenced (on) Monday involved a coordinated ground and air assault," said Danja.

"It was aimed at destroying the terrorists' camp... A total of 37 suspected Boko Haram militants were killed in (a) cross fire exchange."

The assault came after Boko Haram gunmen dressed in military uniform and riding motorbikes on Sunday killed 19 people near the Nigerian border with Cameroon, according to residents and survivors of that attack.

On October 15, the military said it repelled coordinated attacks by Boko Haram Islamists, killing 40 insurgents, although it provided few details.

Nigeria launched a major offensive in the northeast in mid-May aimed at crushing Boko Haram's four-year insurgency, which has left thousands dead.

Military officials have described the campaign as a success and have released details of operations in which they say hundreds of insurgents, including several top Boko Haram commanders, were killed.

But Islamist attacks have continued and scores of civilians, including more than 100 students, have been massacred since July.

The mobile phone network has been switched off in much of the northeast since the operation began, a tactic the military said would block Boko Haram from coordinating attacks.

But with witnesses and local officials largely unreachable, the military's accounts of clashes have been difficult to verify.

Boko Haram has said it is fighting to create an Islamic state in Nigeria's mainly Muslim north.

Violence by the group is estimated to have cost more than 3,600 lives, including killings by the security forces.

The southern half of Nigeria, which is Africa's most populous country and the continent's biggest oil producer, is mostly Christian.