'No Time for Bluffing', EU Tells Ukraine over Tymoshenko 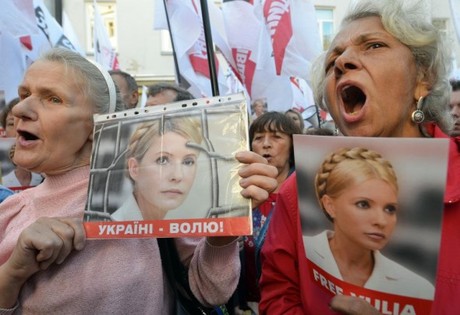 An EU foreign minister on Tuesday told Ukraine it had less than a month to allow opposition leader Yulia Tymoshenko to leave jail and fulfill other conditions, warning that the "time for bluffing" was over.

The release of former prime minister Tymoshenko, who is serving a seven-year sentence for abuse of power while in office, is a key condition Ukraine must fulfill ahead of signing a groundbreaking trade and integration deal with the European Union in late November.

Polish Foreign Minister Radoslaw Sikorski said in the Ukrainian capital Kiev that time was "very short" for Ukraine to come up with a solution that would be acceptable to all sides.

Sikorski and Swedish counterpart Carl Bildt met with Ukrainian President Viktor Yanukovych for around two and a half hours on Tuesday.

"For us decision time will be November 18," Sikorski said, referring to a meeting of the EU Foreign Affairs Council, the final gathering of the body on the issue before the summit due on November 28-29 in Vilnius.

"Time for bluffing is over on both sides. It's the time for action now."

EU foreign ministers said at a meeting in Luxembourg on Monday that Ukraine had not yet fulfilled all the conditions set for the deal, calling for an end to selective justice and urging electoral reform.

Sikorski and Bildt traveled to Ukraine after Yanukovych said last week he was willing to let Tymoshenko go for treatment abroad but refused to say whether he would pardon her.

European Parliament special envoys, Aleksander Kwasniewski and Pat Cox, indicated earlier this week Yanukovych's proposal may not go far enough. They said that any solution over Tymoshenko "must respect the dignity and secure the agreement of each of the key personalities involved on both sides."

Yanukovych is believed to be looking for ways to let Tymoshenko, who suffers from back pain, go abroad but also to prevent her from staging a political comeback and taking part in presidential polls in 2015.

Under legislation submitted to the Ukrainian parliament, Tymoshenko would have to return home after medical care to continue serving her sentence.

Yanukovych's foreign minister Leonid Kozhara said on Tuesday that there was a "strong political will" on the part of Ukraine.

"We expect that the conclusions by the Cox and Kwasniewski mission will be positive," he said.

Cox and Kwasniewski, who are also now in Ukraine, visited Tymoshenko in hospital in the eastern city of Kharkiv on Tuesday. They refused to speak to the media afterwards.