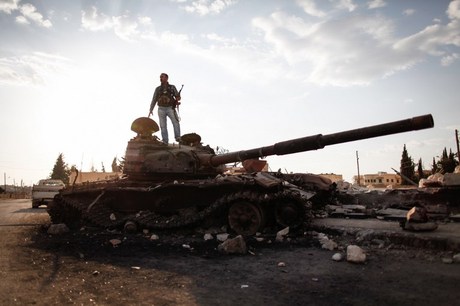 Several brigades, among them the Al-Qaida-affiliated Islamic State of Iraq and the Levant (ISIL) and Al-Nusra Front, seized control of army positions "near weapons depots, by Mahin village," the Syrian Observatory for Human Rights said.

Rebels also seized a gas well located outside Sadad, a Christian town near Mahin, said the Observatory, as clashes pitted them against loyalists.

On Monday, opposition fighters entered Sadad, aiming to advance through it towards Mahin and the depots.

But the army pushed them back and deployed its own troops in Sadad, said the Observatory, which also reported five killed in Wednesday's clashes there.

Continuously inhabited for thousands of years, the town lies on the road linking Mahin and the rebel-held Qalamun area of Damascus province.

In Qalamun, which lies on the Lebanese border, loyalists have been fighting for months to wrest control from the opposition.

Activists say troops fighting there are backed by fighters from the Lebanon's Hizbullah.

Referring to Sadad, a rebel commander said "the regime is responsible for whatever happens to this historic town."

The rebels had entered the town without a fight, he said.

"The police station surrendered without resistance, and there were no clashes until the regime tried to retake the town by force. It used warplanes, artillery, tanks and all kinds of conventional weapons," said Lieutenant Colonel Oraba Idriss, who defected from the army to join the rebels.

Many of the town's residents have fled in the past hours, and as the rebels advanced, the loyalist air force launched an air campaign on the area.

Elsewhere, fierce clashes raged in Moadamiyet al-Sham southwest of Damascus, which has been under siege for nearly a year.

The opposition has called for the establishment of humanitarian corridors to allow assistance to flow into the rebel-held town.

State news agency SANA said one of the shells struck near the Sheraton Hotel, and that "the terrorist attack injured two people and caused material damage in the area."