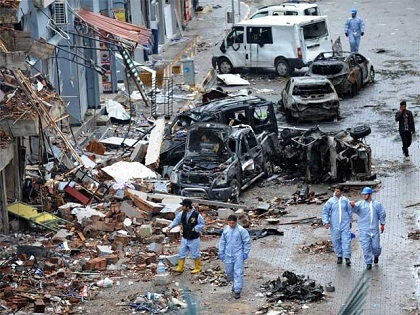 Turkish prosecutors have charged 33 people suspected of involvement in a May bomb attack that left 52 dead in a small border town and that Ankara has blamed on the Syrian secret service.

Prosecutors in the southern city of Adana are seeking life sentences for the suspects, two of whom are Syrian, after charging them with "murder with the use of explosive device", the Dogan news agency reported on Wednesday.

The alleged mastermind of the attacks, Mihrac Unal, is a former far-left militant turned supporter of Syrian President Bashar Assad. He remains at large, though Turkish media reported he has lived in Syria for many years.

Eighteen of the 33 suspects were placed in pre-trial detention.

The car bombing on May 11 in the town of Reyhanli, just a few kilometers from the main border crossing into Syria, left 52 dead.

The conservative Islamic government of Prime Minister Recep Tayyip Erdogan openly backs rebels opposed to the Syrian regime and has welcomed more than 600,000 refugees since civil war broke out there in 2011.

pathetic of turkish authorities. months ago redhack leaked official turkish documents showing turks knews syrian rebels and al qaeda elements were behind the terrorist attack. seems like they cleaned it up and are covering for erdogan's miserable decisions.