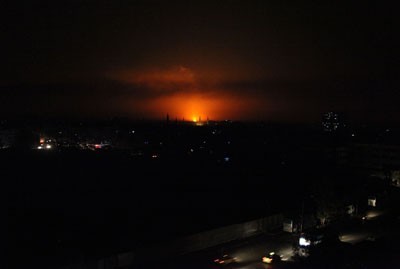 An attack by rebels near Damascus has caused a power outage across Syria, state news agency SANA quoted the electricity minister as saying.

"A terrorist attack on a gas pipeline that feeds a power station in the south has led to a power outage in the provinces, and work to repair it is in progress," Emad Khamis said.

And the London-based Syrian Observatory for Human Rights said "flames were seen in the al-Ghassouleh area near the airport and the sounds of blasts were heard."

"Preliminary reports said the area was shelled by rebel brigades, which led to the explosion of the gas pipeline," it added.

An Agence France Presse journalist in Damascus said he could see from a distance a huge fire blazing near the airport, which is located near the affected power station.

He also confirmed power was out in the capital.

The Observatory reported outages in several areas of the country, including Aleppo in the north and Homs in the center.

"It is likely this was a large-scale operation planned well in advance," said Observatory director Rami Abdel Rahman.

In September, a similar outage was caused after a high voltage power line was sabotaged.

bravo the rebels, they succeeded in freeing the Syrians from decent lives

king.faisal, I like you man, but I need to tell you that I am really happy that Damascus is in total darkness... I do hope that they stay in total darkness for 29 years (That is how many years they occupied us and they worked on dividing us among ourselves so they can rule us and sadly they succeeded). There are so many Lebanese people in the regime Syrian jail who have been living in darkness for years and the regime does not give a crap about them. It is sad my friend that you support a ruthless dictator… It is very sad… Syria gave us electricity and in the same time gave us bombs and bullets.. They did worse than what Israel had done to us. They gave us electricity so they can make sure that we can always be dependent on them… that was in their plans to make Lebanon part of Syria…
My friend, I am very happy that Damascus tonight is in total darkness. Allah Kebbeer… More and more I believe there is a GOD!!

lebcad,
I do appreciate what you said and know what you mean. However what Assad did to Lebanon was not done by him alone but by his regime and the whole Government apparatus. So I hate him, his regime and any Lebanese or Syrian entity that supported him past and present. This might mean to be 30% of the Syrians and sadly higher percentage of the Lebanese.

U must be lack of roar

Zero arguments.... Attacking him 4 his dual citizenship (that ± all of us have) is patheticly, laughably low ....

U dugg ur own grave. Jajajajaja

king.faisal, "We have been divided since we were established"... I totally agree with you. However, the Syrian regime exploit that to their advantage... You would expect this from your enemy, but not from your friend... Syria was supposed to be "The Sister" for Lebanon, it trned out it was "The Snake".
At the end of the day you are supporting a dictator who killed thousands and thousands of innocent civilians, of whom so many are women and children. Bashar is a killer and must be hang for what he did.

Maybe Assad can try to impose unity on Syrians first. Maybe if he leaves us long enough and deport his proxies in Lebanon will get weaker and then we can unite.

you seem well informed. explains why your brains seem to have turned to soup long ago.

pride, dignity, resistance and steadfastness in adversity. nothing you'd know about.

Momo- Syria has caused us great pains over the last 30 years. It is quite enjoyable that they started tasting some of the pain and suffering they have inflicted on us. But seeing a Syrian like you masquerading as a Lebanese patriot boiling inside from spite is actually more enjoyable. :) :) :) :) :) :) :) :) :) :)