2 Dead, 21 Hurt on Thursday as Fighting Continues in Tripoli 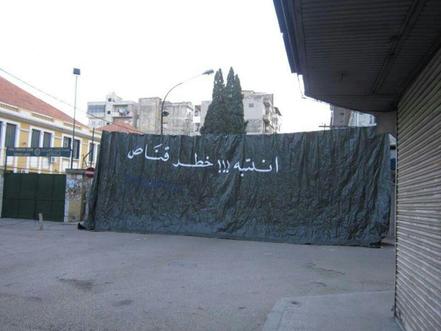 Two people were killed on Thursday and 21 others were injured, including a soldier, in renewed fighting and sniper activity in the northern city of Tripoli, the state-run National News Agency reported.

NNA identified the other victim as Musbah al-Nazer. Media reports said he was killed when snipers opened fire at his car.

Thursday's casualties bring the toll from four days of fighting to three dead and 60 injured including nine soldiers, according to NNA. A security official told Agence France Presse that four people have been killed and 35 others have been injured during the ongoing violence.

In the evening, the sounds of intermittent gunshots and rocket-propelled grenades were still being heard and sniper fire was targeting homes and roads in Bab al-Tabbaneh and Jabal Mohsen, the agency said.

“Army troops are still responding to the sources of gunfire and trying to contain the situation,” it added.

Earlier, Tripoli MP Mohammed Kabbara reiterated his call to salvage the city, which for years has been witnessing deadly gunbattles between rival gunmen.

The lawmaker also urged security agencies to establish a joint operations room to bring the situation under control.

The fighting broke out on Monday evening as celebratory gunfire erupted in Jabal Mohsen over Assad’s appearance on al-Mayadeen television for an interview.

The violence between the rival neighborhoods of Bab al-Tabbaneh and Jabal Mohsen has worsened since the March 2011 start of Syria's uprising.

each day confirms we are going towards civil war.
by the way I am amazed by the above comments asking for the people of Tripoli to leave it so the fighting stops!
if anyone should leave Tripoli it is hizbushaitan and its affiliates.
these terrorists should leave Lebanon actually.

The KSA and their lackeys like Geagea are promoting a civil war in Lebanon ... In the last two days Geagea and the former Saudi security minister have made it very clear that Lebanon is to be targeted for more sectarian treachery and violence.

Fortunately most Lebanese, even M14, know that should there be a civil war it would be M14 that would be crushed. The vast majority of Shia and Christians, 70% of the population, would side with M8.

Of course they are blaming HA for their planned violence. Then when they have completed their crimes they can say: "We told you so."

The KSA has become an outcast. Even the US is distancing themselves from Riyadh. The KSA is now completely psychotic in their paranoia.

Remember Lavrov disclosing Nusra Afghanistan chem weapons training for use in Iraq? Now who would be financing that program?

Tripoli needs a curfew and constant check points immediately ... these measures should have been put in place months ago. The stalling and half measures are a direct result of M14 interference to aid the ongoing effort to supply the terrorists in Syria. This violence is but a distraction so that the Lebanese war profiteers are not impeded in their dirty business ...

What I see is that people from Jabal Mohsen are spying on weapons and jihadist movements for Syria ... Remember the 20 jihadist kids ambushed?

The arms dealers and the Islamists are trying to curtail this spying thus all the violence ... probably around shipments and movements.

And that is where the political cover for arms dealers comes in ... They do not want Mohesen to be able to have free movement to spy ...

I think both parties are hired by Azzad 2 make troubles.The alawites know it, the Sunnis don't, only a handful of their tripoli leaders know that the contractor is Syrian. That's why other sunni communities don't assist them.

the one needing to be hung for treason is you FT for supporting the Iranian enemy against your own people. and you say I need to be in a mental hospital? :)
go and have a check of who you are: a supporter of an Iranian terrorist bunch, killers of babies, stealers, murderers, bombers,.... and you and mowaten are proud of it :) you are traitors as simple as that.

How shameful- supporters of another leader fighting their own people.