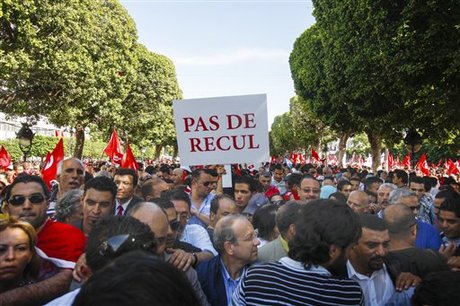 "Five people were wounded, including one who had a fractured leg and another who suffered face burns," Amdouni told Shems FM radio station.

"Hundreds, or thousands" of assailants attacked the building in the town west of Tunis, throwing rocks and petrol bombs, said the Ennahda representative in Beja.

The incident took place after the burial of a policeman killed by jihadists on Wednesday evening, amid rising anger at the ruling party's failure to stem deadly violence caused by extremists.

Earlier on Thursday, protesters torched Ennahda's office in Kef, where a policeman killed in fighting with suspected jihadists was to be buried, an Agence France Presse photographer reported.

The walls of the building were burned and equipment inside it destroyed, with witnesses saying protesters had ransacked the office in the morning.

The remains of charred documents and tires were strewn in the road outside the building, occupied on the second floor by the ruling Ennahda movement.

The office is located just meters (yards) from the family home of one of six policemen killed on Wednesday in a firefight with suspected jihadists.

President Moncef Marzouki has declared three days of national mourning for the men but their families have barred officials from attending the funerals.

"We have rejected plans by the government, the politicians to pay homage... We reject their condolences, their presence," said Jamel Salhi, the brother of one of the victims, in the central region of Sidi Bouzid.

The country's political transition has been paralyzed for months, with the opposition accusing the Ennahda-led government of laxity in reining in jihadist groups.