Syria Troops Close in on Suburbs Hit by Chemical Attack 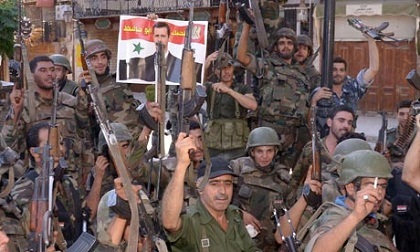 Syrian troops captured a key town southeast of Damascus on Thursday, a military source said, as they sought to "tighten the noose" around suburbs struck by chemical weapons in August.

The Syrian opposition meanwhile said it would meet on November 9 to decide whether to attend a Geneva peace conference that the United Nations is trying to convene in parallel with chemical disarmament efforts.

Syria is set to hand over a detailed plan for destroying its chemical arsenal Thursday, part of a U.N.-backed disarmament bid that averted U.S. military strikes after the August 21 sarin gas attack, which killed hundreds of people.

A military source told AFP troops had recaptured Hteitit al-Turkman, describing it as an "important center for the terrorists," the regime's term for the rebels who rose up against it in 2011.

The operation was part of a larger effort to close in on Eastern Ghouta, a ring of suburbs besieged by government troops for months, which were targeted in the August chemical attack.

Damascus has denied U.S. allegations it carried out the attack.

Syrian authorities were meanwhile working to restore power after rebels attacked a gas pipeline Wednesday, causing blackouts across the country and setting off a huge fire near the airport, where a key power plant is located.

Electricity Minister Emad Khamis said Thursday that the fire had been extinguished and that power was being "gradually" restored to some provinces, according to the official SANA news agency.

Elsewhere in Syria, Kurdish fighters battled with jihadists for several hours as they advanced on a border crossing with Iraq held by the Islamic State of Iraq and the Levant, an Al-Qaida affiliate that operates in both countries.

And in the central city of Homs a car bomb killed at least one person and wounded 43, state television reported.

Some 115,000 people have been killed and millions driven from their homes since a brutal crackdown on Arab Spring-inspired protests in the spring of 2011 set off a full-scale civil war.

The Organization for the Prohibition of Chemical Weapons said Syria was expected to hand over its disarmament plan by Thursday, the latest step in a U.S.-Russian accord which calls for all Syria's chemical weapons and production facilities to be destroyed by mid-2014.

A joint U.N.-OPCW team, in Syria since the start of the month, has inspected 18 of 23 declared sites, destroying production equipment in almost all of them.

Sweden said Thursday it would aid the disarmament effort by providing an air force unit and a Lockheed C-130 military transport plane, to be based in Cyprus.

But parallel efforts by the United Nations to convene a peace conference in Geneva next month have run into resistance from the fractured opposition, which is insisting on a raft of preconditions.

God bless the brave SAA in exterminating foreign-backed caliphate-building terrorists from its lands.