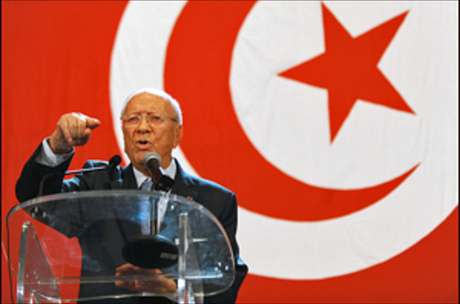 One of Tunisia's main opposition parties on Thursday ruled out participating in negotiations to end months of political deadlock without the government giving a written promise that it will quit.

"Nidaa Tounes believes it is not feasible for the dialogue to begin... without a formal and written commitment by the government to resign," said the party headed by ex-premier Beji Caid Essebsi, who is an outspoken critic of ruling Islamist party Ennahda.

The opposition is demanding that the Ennahda-led government give a clear commitment to step down within three weeks of the start of negotiations, to make way for a caretaker cabinet of independents.

The national dialogue due to start on Wednesday faced fresh delays when critics of Islamist Prime Minister Ali Larayedh rejected as "ambiguous" his stated commitment to the "principle" of stepping down, without giving a timeframe.

The long-awaited talks, which are the centerpiece of a roadmap to end the political paralysis gripping the country since the July assassination of opposition MP Mohammed Brahmi, are now due to start on Friday at 0900 GMT, according to mediators.

As well as forming a government of technocrats within three weeks, negotiators must adopt a new constitution and electoral law, as well a timetable within a month for fresh elections.

These are key milestones in Tunisia's democratic transition, which has effectively been blocked by wrangling between the Islamist-led coalition and the opposition, nearly three years after the 2011 ouster of president Zine El Abidine Ben Ali.

Since then, the country has been rocked by jihadist violence, which the opposition accuses Ennahda of having failed to rein in.