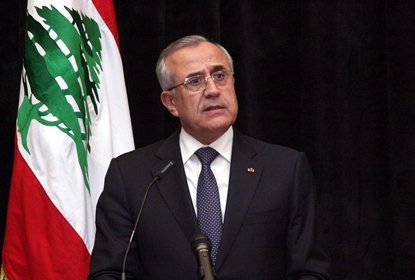 President Michel Suleiman revealed on Thursday evening that he asked security forces and the army to deploy the necessary units to control the security situation in the northern city of Tripoli.

Suleiman's request came as Tripoli has been witnessing intense clashes between the city's rival neighborhoods of Jabal Mohsen and Bab al-Tabbaneh.

"It is not acceptable that the bloodshed continues in Tripoli,” Suleiman said on Twitter, urging all officials to work on "saving" the northern city.

"Tripoli's residents and children deserve to live in peace as they represent religious coexistence."

Suleiman noted: “I have asked security forces and the army to deploy the necessary units that could control the security situation in Tripoli.”

Two people were killed on Thursday and 21 others were injured, including a soldier, in renewed fighting and sniper activity in the northern city of Tripoli, the state-run National News Agency reported.

Thursday's casualties bring the toll from four days of fighting to three dead and 60 injured including nine soldiers, according to NNA.

Earlier in the day, Suleiman urged easing the formation of the cabinet to “preserve the idea” of a national unity cabinet that the president had suggested.

"We also call for resuming national dialogue that would be based on the conclusions of previous sessions, especially on the principals of the Baabda Declaration,” he said during the inauguration of the President Michel Suleiman Boulevard in Baabda and of the new municipality building in al-Metn's neighborhood of Hazmieh.

The president stated that boycotting the parliament's work is “not democratic.”

"Democracy stipulates meeting together, holding talks and voting,” he stressed.

Suleiman also pointed out to the importance of following-up with and executing the international community's decisions that were reached in New York, concerning the promised support for Lebanon to deal with the influx of Syrian refugees.

He should get the Nobel peace prrize

How did you come up with the idea that the president was blaming m14 in his speech. Slamming hariri and his goons?please tell me how did you read that in his words?so jabal mehsen have nothing to do with the fights?the president is not afraid of saying things clearly, just a few weeks ago he clearly attacked hizballa for intervening in Syria, if his speech was against M14, he would have said it directly.

Aoun, a significant part of m8 is not attending either. Why were you not calling m8 in 05-06 babies for not attending, oh excuse me, SHUTTING down parliament? Your hypocracy reeks to high heaven.

My friend, the president is not closer to M14 because he likes them, it just so happens that the national line he is taking is more aligned to the philosophy of M14. Now with that said M8 had the parliament closed for almost 2 years some time back, why didn't anyone complain?

Surprising name. Considering parliament was constitutional. It was the cabinet that according to you was not. Ding!!!!

the case of tripoli should not be resolved by force only. It should be resolved by force arrest of those who surrender and killing those who do not then immediately should witness after calm is restored a huge campaign of disarmament and reconstruction and welfare. This should be held in once and be planed between security agencies NGOS and the red cross the first phase should be a total demolition of those outlaws then a disarmament of every house of all sides in Tripoli beit beit zenga zenga dar dar fared fared and then a welfare distribution of goods and foods and reconstruction it could cost few hundreds of millions but it will change the course of the city for sure. But unfortunately leaders and commanders do not know how to do such plans and implement them they just know how to speak and say I SAID AND HE SAID and i ORDERED and HE ORDERED. Ya Haram !

"Suleiman Asks Army, Security Forces to Control Situation in Tripoli"... Oh really?? The fighting has been going on for oever a year and noe he is asking Security Forces??
We are bunch of losers in sad country... We need people with balls...

Wat r u talking about lack of roar? U know a president is useless of the government keeps sabotaging him.

Suleiman is the best ever!

What is so difficult about deploying the army and having it shoot or arrest everything with a weapon that's not in uniform? Including the stupid politicians who back them?

We have learned NOTHING since 1975.