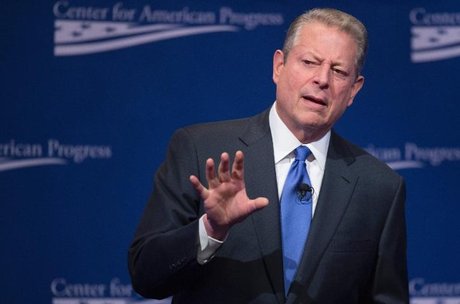 Gore, who has championed action against climate change since his razor-thin loss for the White House in 2000, praised Obama's general views on climate change but said his fellow Democrat faced a key test on the proposed project.

"This should be vetoed. It is an atrocity and a threat to our future," Gore told a conference marking the 10th anniversary of the Center for American Progress, a left-leaning think tank.

"Junkies find veins in their toes when the ones in their arms and their legs give out. We are now at the point where we're going after these ridiculously dirty and dangerous carbon-based dirty fuels, and we've got to stop that," he said.

Obama has held off on a decision on the proposed 1,179-mile (1,897-km) pipeline, which would take oil from Alberta's tar sands to U.S. refineries, as he waits for a review on the environmental impact.

Opponents say that oil from Alberta's tar sands is among the dirtiest on the planet as it must be melted with steaming hot water before processing, further contributing to carbon emissions blamed for climate change.

Industry groups and Republican U.S. lawmakers, some of whom reject mainstream science on climate change, have heavily promoted the project as an employer. Canada has billed itself as a friendlier source of energy for the United States than oil producers in the Middle East.

"The jingoism and the sound-bites of arguments on both sides are getting too much airplay rather than the actual facts and struggles that we have with making, creating that prosperity," said Trudeau, seen as a potential future prime minister.

Trudeau, the eldest son of late prime minister Pierre Trudeau, said it was more important to find a path that is "long-term, sustainable, and will bring us to independence from hydrocarbons sometime in the future."

But Gore, in his remarks, said that traditional economic planning paid insufficient attention to environmental risks.

He pointed to a slew of disasters linked to climate change including unprecedented storms in his native Nashville and floods in Pakistan that affected 20 million people in 2010.

"We are seeing these once-in-a-thousand-year events on a regular basis," Gore said.

"This is part of the cost of carbon and it's not included on the balance sheets, it's not included in the way we calculate profit and loss and productivity and growth -- which is the holy grail" for economists, he said.