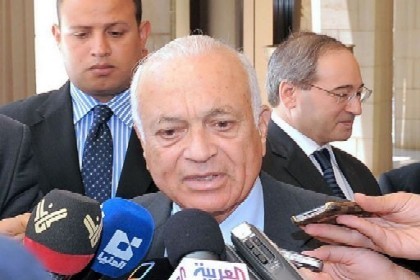 The Arab League will submit to the United Nations a request for recognition of a Palestinian state, Secretary General Nabil al-Arabi said on Thursday in Doha.

The Arab peace initiative committee "has decided to submit a call to the member states of the United Nations to recognize a Palestinian state," Arabi told a news conference after a meeting of the committee in the Qatari capital.

It would "move to present a request for full membership of a Palestinian state in the General Assembly and the Security Council," Arabi added.

Palestinian negotiator Saeb Erakat said the aim of the Doha meeting, which was attended by Palestinian President Mahmoud Abbas and various Arab foreign ministers, was to "strengthen Arab support for obtaining U.N. membership for a Palestinian state."

The plan for the Palestinians to seek recognition from the U.N. is opposed by Israel, the United States and some European governments.

But peace negotiations between Israel and the Palestinians are stalled, with the stalemate increasing Palestinian determination to seek statehood via the U.N.

The Palestinians say they will not return to the negotiating table without a freeze on settlement construction and clear parameters for new talks, including that any borders will be based on the lines that existed before the 1967 Six Day War, with mutually agreed land swaps.

But Israel has rejected any new settlement moratorium, and says setting preconditions for talks prejudges the substance of negotiations.

While The president of an Arab country, continues butchering his people the Arab Peace initiative committee is busy calling the UN to acknowledge the Palestinian State. No action towards the Syrian events or even a mention of what is happening?
It seems to be OK for an Arab leader who declares himself as a fierce enemy of Israel to repress, torture, and barbarically kill his countrymen without any objections from the famous Arab league.
What a bunch of hypocrites they are?

But Hariri Mafia & Co., SARL and his Christian Sunnis wanted the Palestinian state to be in the South after they, with the help of their Israeli friends (more like their masters, actually) and their other Friends-of-Israel root out Hezbollah from their land. What's wrong with the Palestinian leadership? Mafioso Don Imbecillus Hariri must do something about this ASAP. Come home, baby. Your goats and sheep need you!

"Veto! Oh yes, veto! Veto, veto, veto, veto, Veeeeeee-TOWUH! Can I be president another four years Massa? Can I? Please? Huh? Please? I killed the people you don;t like. I sold the Americans to private bank your buddies own. Cheap. Real cheap! I let you gun down that kid from New York. If I keep Palestine from becoming a nation using the exact same method Israel became a nation, can I please stay in the White House until 2016? Please massa?" -- Official White Horse Souse

Youssef Haddad aka Yosi haddath. Israel has killed more in less than a month, year few years for the past 60. 1400 mostly civilians killed in gaza 2008. 1300 mostly civilians killed in 2006 Lebanon. In Syria,approximately 1400 have been killed over the past 4 months.400 have been police and security personal, Including 130 police having their heads chopped off. Their is no bigger hypocrite than you and your Zionist racist, apartheid country.

Ado Australia: Israel is a Zionist Apartheid state. mmmm, wonder why did you leave the liberal state of Lebanon, why didn't you move to most Liberal state named Iran or Saudi Arabia.
Wonder why for over than 64 years, you have in your ex country Lebanon 400,000 Palestinian, what kind of human or civil rights they got from Lebanon? why Australia is giving civil rights to its immigrants?
Wonder why the Arab rich countries never supported the Palestinian for example Kuwait ? what this country done after the invasion of Iraqi troops expelled by the assistance of American troops? kicked out all Palestinian.
With one day income of UAE, all Palestinian problem could be solved.
But its easy for Arabs to throw the hot potato toward the "Zionist state", as if all the problems of Arab world is because of Israel, How convenient and so typical. covering their own corruption and the fact that they left behind with no true democracy , controlling their people only with incitement toward Israel.