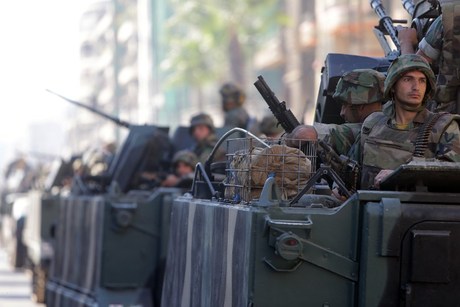 The army has arrested one of the suspects in the bus attack in the northern city of Tripoli and identified the rest of the assailants, the military command said.

The army leadership said in its communique late Saturday that Yehya Samir Mohammed, a Syrian, has been arrested and that soldiers were pursuing the remaining three suspects.

It identified them as Khaled Jamal al-Rahi, Omar Mohammed Abdulaziz al-Ahmed and Mustafa al-Hamid Jawhar, who are all Lebanese.

The communique said the army was able to arrest Mohammed after carrying out several raids.

At least six residents from the Tripoli neighborhood of Jabal Mohsen were wounded on Saturday when a van carrying eight passengers came under attack by masked gunmen in the area of al-Tabbaneh near Dar al-Salam school, the army said in a previous communique.

The assailants took the passengers at gunpoint to local streets in the area and shot six of them in their feet, the military said.

Their injuries were not life threatening, it added.

Tripoli is the scene of frequent Syria-linked battles, that pit Sunnis from Bab al-Tabbaneh against Alawites in Jabal Mohsen.

Most Sunnis support Syria's revolt against President Bashar Assad, while Alawites, who belong to the same sect as Assad, back his regime.

The latest fighting ended when the army deployed along Syria Street, which separates the two districts and acts as the makeshift frontline.

An Nahar daily said Sunday that the army has advised residents of both Bab al-Tabbaneh and Jabal Mohsen who reside in the frontline to clear their homes.

But according to LBCI, a military source denied the report.

An Nahar also quoted Arab Democratic Party official Abdul Latif Saleh as saying that the consequences of Saturday's attack would be dire if the situation does not change.

He urged President Michel Suleiman and Army chief Gen. Jean Qahwaji to “quickly interfere to resolve the problem of attacks.”

These thugs must be hunted and brought to justice.. Jabal mohsen is part of Lebanon these civilians were returning from work, unarmed and just wanting to lead a normal life and provide for their families..

yes he said it was syria! LOL and of course not one M8er to contradict him like little cowards they are....

Please remind me again what was the Samaha Mamlouk plot all about and who was the Syrian medias, the Lebanese pro Assad medias, talking heads and Samaha himself already blaming for the attacks they were clandestinely going to perpetrate?