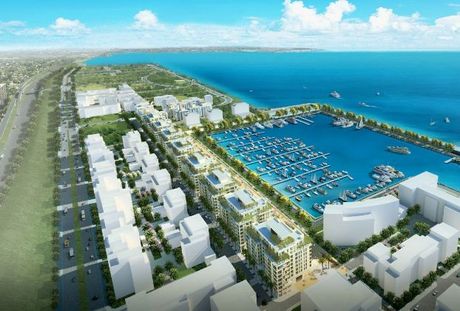 Waterfront City, the flagship project to line the Joseph Khoury Marina stretch in Dbayeh , was launched Wednesday, in a breathtaking ceremony on-site in Lebanon. Hundreds of guests, partners and members of the press gathered on the vast project site, where the much-anticipated grand-scale master planned development will rise from, to witness its unveil. The project, as was confirmed, will include residential, commercial and leisure facilities, to unfold in multiple phases over the next few years.

On July 13, 2011, Phase One of Waterfront City was launched, which will include 7 unique buildings, an uplifted promenade with cafes, restaurants and a retail zone. The project, located on the Mediterranean Sea, approximately 15km north of Beirut, is a product of a strong joint collaboration between Ste Joseph G. Khoury et Fils Holding and regional developer Majid Al Futtaim Properties.

Covering a total area of over 193,600 square meters, Waterfront City will serve as an unparalleled development in Lebanon, in terms of scale and offerings. With over 5,000 luxurious residential units of varying sizes, catering to all the modern demands of the Lebanese buyer; a full-fledged commercial district, complete with a grand international shopping mall and numerous dining and entertainment options; along with a renowned hotel chain.

“With Waterfront City, we reaffirm our commitment to offer the Lebanese population only the finest of residential and commercial spaces, to create an unmatched community within the metropolitan city of Beirut,” said Alain Bejjani, member of the Board of Directors for Waterfront City, at the event.

The master-plans of the development have shown that it will be built around the famous Marina Club, offering residents an exclusive and calm lifestyle away from the city. A newly developed health club, gym and year round swimming pool will also be available to the residents to enhance the lifestyle offering and ensure convenience for active residents.

Walid Khoury, CEO of Ste Joseph G. Khoury et Fils Holding outlined the plans for this development that have been underway for numerous years now, and highlighted that only through the partnership with Majid Al Futtaim Properties, could they be realized.

Waterfront City is in fact part of a one million square meter reclamation project completed in 1997. All infrastructures, such as parks, roads, footpaths, lighting and security, will be upgraded by the developer. The entire area where Waterfront City will be built is protected by well established town planning rules to ensure the vision of the project is maintained.

Waddah El Solh, Country Head for Majid Al Futtaim Properties in Lebanon, shared the vision of the holding with the guests, stating that, “Majid Al Futtaim Properties has a long term commitment to this region and has more projects planned. We are bringing that same philosophy to Beirut, with the construction of the Beirut City Center shopping mall, and now the Waterfront City project,” he concluded.

“The architectural plans for Waterfront City that are currently underway will fuse different elements to enrich the project. It will offer residents a way of life, never before seen in Lebanon,” said Elie Gebrayel, Chairman and CEO of ERGA Group, the project’s architects and engineers. ERGA Group, along with SB Architects (from the United States) have joined forces to complete the Master Plan as well as the conceptual design of the project.

Invitees were able to experience the vastness of Waterfront City, as the event launch was planned on-site, with a specially-built platform extending to cover the first phase. The unmatched views of the vast horizon, the marina, along with mountains and the cityscape, were visible from the event site, giving guests a feel of what the project will offer.

but don't market it as "for lebanese " no its only for the 10 percent of the richies upstairs the other 90 can only dream of affording places like these.

This is great... but who will be willing to invest a penny in Hezbollah Land...
The Horizons are too dark...

another stupid project only aimed at the rich! why doesnt the gvt do somethg to build cheap appartments in beirut for those who can t afford to stay in the capital because of the speculation instead of giving permits to these ugly and environmentally damaging projects?

an answer was that if they cant afford to buy in beirut let them get out! politically responsible isn t it?

First and foremost the see shore should be "by law" accessible to all Lebanese, so this construction is illegal to start with. Second, high rise building on the sea front which means that all other building that used to be waterfront now have a blocked view of the sea. So once again everyone was bought out in order to get this through for approval.

Another concrete jungle over the existing awful jungle that we already have. A corrupt society that worships nothing but money. Only here are the corrupt heroes and the honest 7ameer.

AS I SAID TIME AND AGAIN, WE WILL NEVER BECOME A CIVILIZED SOCIETY SO STOP HOPING.

They must change the foreign ownership laws that should forbid non Lebanese from purchasing more than one, 200m2 apartment. Similar to that in Cyprus.

Excellent project! its by time they invest in that area... its close to beirut, the water is clean and now its a dump! The best of luck to them, hopefully it wil bring with it much needed foreign investment and show the people something they might loose by going in to politics.

@peace - you are a stupid project - yes it is aimed at the rich as it should be! rich ppl = more investment! While I agree that the govt should make it a point to assist the middle and lower classes, ITS NOT THE GOVT THAT IS FINANCING THIS PARTICULAR PROJECT ! ITS PRIVATE INVESTORS!

More residences? Half Achrafieh's blocks are still unsold.
Commerces? Who can afford there? Your local man2oucheh place? Your local cocktail chi2af place? Or another industrialized globalized series of Lina's, Paul's,burgerkings.,mango, zara.. I still prefer the small artisanal restaurants and bars of jbeil old city to these factory-like commerce that are becoming so much in fashion...but unfortunately I know what to expect...

Problem with these projects is not that they cater for the rich. No one is against investments.The problem is taking prime real estate away from its rightful owners - the Lebanese people - then deny them access with "exclusive" fees.
Why can't Lebanon be civilized country that GUARANTEES BY LAW access to waterfront and public space? There are two types of countries: 3d world countries where the wealthy and politically connected DENY ordinary people access to their own environment (beaches, forests, etc.), and civilized countries where anyone can go to clean beaches and bask in the sun for free. Just look at what Emile Lahoud did in Nahr al-Mawt. He dug up the mountain just so he can get to Baabdate without being bothered by traffic. But in Lebanon, if you are rich and powerful, you can rape the country and get away with it. Has anyone wondered wondered what that "Waterfront" monster will do to traffic? How about a rapid train system running along the coast to help with traffic?

Well guys...the project itslef is not bad, and the towers they are talking about are not real high rise. the pictures show average neat buildings
Despite pricing and legal issues, I like the project. At least better than the desert which is now

some facts. no access to marina but only to promenade level (+10 meters above see level). no cellar. no solar or renewable energy. all roof tops usually considered by law as "parties communes to install renewable energy for buildings" were sold at huge price. exterior & interior design is very common. no final drawing of the apartments. no specs of the equipment that are going to be installed. nothing clear. everything optional. no indication of the maintenance fees. no indication of club location / specs / fees

sadness on sadness from port of beitut till dbaye' no sea front corniche no parks no beaches ... instead jabal zbele' ,industries ,most polluted sea and to bring glamour and contradiction some fancy buildings with a fancy marina.
but what about all the population of berj hammoud, dawra zalka jal el dib antelias and dbaye' ???????