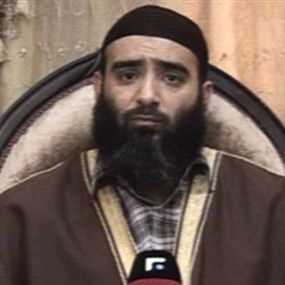 Tripoli figures condemned on Sunday the attack on Alawite men who hail from the northern Jabal Mohsen neighborhood, stating that this incident is “strange to the city's history.”

"We condemn the attack against unarmed citizens and we call on security forces to identify and prosecute the assailants,” Tripoli figures said in a released statement after a meeting at al-Mustaqbal bloc MP Mohammed Kabbara's house.

"This is strange to the city's history, traditions and to the ethics of Tripoli's residents.”

The statement pointed out that what is happening should not divert the attention from the “main issue,” which is the double explosion that targeted two mosques in Tripoli.

"We urge prosecuting the terrorist group that executed the blasts and unveiling its members' identities and uncovering their ties with the Syrian intelligence,” it said.

“Any criminal act that is undertaken as a response to the Tripoli bombings will only lead to overshadowing the huge terrorist attack and will serve the (Syrian President) Bashar Assad's regime, which will use it to claim that it is the protector of minorities.”

The leaders assured that they will follow-up on Saturday's crime.

The conferees stressed that the army and security forces are the "guarantee for citizens' security."

"And any aggression against them is a part of a conspiracy targeting the security of the city,” they noted.

The statement said that continuous sniper activity threatens people's safety and leads to the eruption of clashes.

"The army must strictly and seriously deal with this issue.”

The figures also condemned the “suspicious and hateful” campaigns launched against the Internal Security Forces' Intelligence Bureau, saying that this “national institution proved its skillfulness in uncovering criminal and spying networks.”

In a related matter, a spokesperson of the residents of Tripoli's Bab al-Tabbaneh neighborhood considered earlier on Sunday that the attack on workers in the northern city's Jabal Mohsen area happened because “the criminal” is not being punished for his activities.

"When the oppressed sees that criminals are not being punished, he takes matters into his own hands,” Sheikh Khaled al-Sayyed said at a press conference.

The cleric elaborated: “What started the crisis in Tripoli was hurling a bomb by Ali al-Zammar from Jabal Mohsen, leading to the death of two people in the area. Al-Zammar is still free and in protection instead of being arrested by concerned authorities ”

"Not dealing with such crimes by the state is what opened the door to other transgressions.”

Al-Sayyed added: “The state's leniency in dealing with the case of former Minister Michel Samaha is what permitted explosions to take place in Tripoli and (the Beirut neighborhood of) Dahieh.”

"Assi also incited sectarian strife in his speech,” he expressed.

Assi had stressed on Thursday that the Council will not tolerate the summoning of top Alawite leader Ali Eid for interrogation in the case of the deadly twin bombings that rocked Tripoli in August.

Al-Sayyed considered that Tripoli “feels humiliated” when the state does not act against those who bombed its mosques.

"I wonder how the assassins of MPs, ministers and Prime Ministers are called a resistance,” he said.

"Tripoli feels that the security plan adopted in the city was meant to contain it while its enemies are placing bombs.”

At least 45 people were killed and 900 others were wounded in a twin blast that targeted the northern city in August.

this scary person is so right. the m8 governement keeps releasing bad people, just like they did with the turkish pilots abductors....

"I wonder how the assassins of MPs, ministers and Prime Ministers are called a resistance,” he said.
How True!!!

the state is there to regulate people and give each person what is due to him, protect people against aggression, and put the aggressor in jail.
the LF were disbanded after the bombing of the church (which they did not do) and geagea went to prison for it.
who is ali eid and all his party to be spared the minimum? why is his party still active with all their weapons threatening Tripoli? why is ali eid still not captured and judged?
if the state wants to fail its citizens, then each citizens has the right to defend himself an his family.
actually it is not just a right, it is his duty.

There are no excuses for either side in Tripoli nor between M8 and M14. Actions against criminals must be swift and commensurate of their crimes no matter who they are ... Mafia sectarianism must come to an end ... no more political cover for anyone ...

With all due respect, you must not have had a decent history teacher. Please read up on history using something other than your favorite faux news channel. The largest Muslim nation in the world by population is Indonesia, but...there were no wars or battles there before the people embraced the faith...hmm....

They accepted Islam after trading and dealing with Muslim merchants. Please spew your propaganda somewhere else.

christianity was spread by blood too... already forgot? LOL

without islam europe wouldn't have made all the great discoveries in the middle ages...

it is not islam that is to blame but the fanatics using it for their interests, as usual...

that is the logic set by hezbollah in the country with your full support!

Lol at first glance I thought the article was going to be about some Qaeda fugitive being captured or issuing a fatwa.

Funny the only microphone is from that one channel.

This al-Tabbaneh cleric should be handcuffed arm in arm with Mr. Eid and taken into custody. Too many non-Lebanese on our land.

they condemned the act, said it was strange to tripoli, 1 suspect is already arrested and 3 others identified, what more do u want ?
Now what about the hundreds of sunnis killed/attacked and no justice was done ?

abu-flamer you are all escapees in a lunatic asylum. This is a great thread it exposes the ridiculousness of your Lebanese logic. These kind of attacks, if done well, are most probably not perpetrated by locals. These are false flag operations to incite violence or get revenge for acts in Syria. The guy in the picture looks like the spiritual leader of Jumbat-al-Nursa to me but he's probably an Israeli moonlighting for some extra cash. What will you all do when Islam becomes reunited instead of self defeating and there shall be Peace on Earth? Go farm on a kibbutz in the Golan Heights?