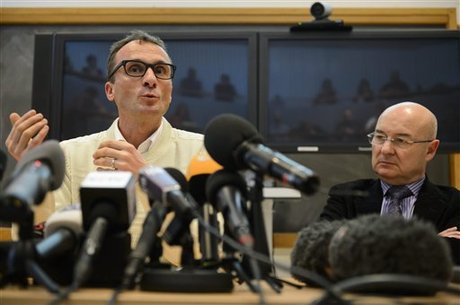 Tests on the remains of Palestinian leader Yasser Arafat have neither confirmed nor ruled out polonium as a cause of death, but indicate a third party was involved, Swiss experts said Thursday.

"We can't say that polonium was the source of his death... nor can we rule it out," said Professor Francois Bochud of the Lausanne Institute of Applied Radiophysics, adding that the amount of polonium in Arafat's remains indicate third party involvement.

However, the scientists pointed out that the high levels of polonium found in the remains and personal effects of Arafat indicate third party involvement in his 2004 death.

Bochud said his team measured levels of polonium up to 20 times higher than it was used to detecting in its research.

"By definition, that indicates third party involvement," Bochud told reporters. "Our results offer moderate backing for the theory of poisoning."

The lab's probe could not say for sure whether Arafat was killed by polonium, however.

"We can't say that polonium was the source of his death... nor can we rule it out," said Bochud, whose institute is part of Switzerland's respected Vaudois University Hospital Centre.

His colleague Patrice Mangin said the lab could have been categorical in its findings if it had been able to obtain biological samples from the Palestinian leader right after his death nine years ago.