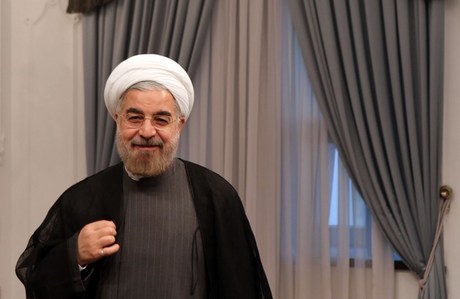 After years of stalemate, recent progress in nuclear talks with world powers owes much to a dramatic shift in Tehran from a policy of confrontation to one of constructive dialogue.

The progress in Geneva that saw negotiators draw closer to a long-elusive agreement than they have been in more than a decade came only five months after President Hassan Rouhani, a reputed moderate, took office after vowing a new approach.

The two sides failed to close a deal, but the marathon talks saw the top U.S. and Iranian diplomats meet for seven hours, something that had been unthinkable for decades after the 1979 Iranian revolution, which made "Death to America" a central tenet of the country's foreign policy.

Ten previous rounds of negotiations with the so-called P5+1 -- Britain, France, the United States, Russia and China plus Germany -- had seen virtually no progress, with Iran insisting on its "right" to uranium enrichment and Western powers accusing it of secretly pursuing an atomic bomb, charges denied by Tehran.

But in last weekend's talks the two sides got tantalizingly close to reaching an interim agreement to freeze or curb Iran's nuclear activities in exchange for the lifting of some international sanctions.

"A new era has begun with the new government and the new team of negotiators," a top Iranian nuclear negotiator, Abbas Araqchi, told the Hamshahri daily Monday.

He referred to "10 years of confrontation" with the West, the legacy of Rouhani's predecessor, hardline ex-president Mahmoud Ahmadinejad.

U.N. nuclear watchdog chief Yukiya Amano also welcomed the change, saying Monday in Tehran that the election of Rouhani "accelerated the negotiations" which led to a deal on a "roadmap" to resolve remaining questions about the Iranian program.

After winning a surprise June victory in the presidential election against a pool of conservatives, Rouhani inherited a country in financial distress and isolated internationally.

Iran's economy has been struggling to cope with draconian sanctions that have more than halved its oil income, depreciated its currency and sent rampant inflation to above 40 percent, according to official figures.

"It is a beautiful thing to have centrifuges spin but on the condition that the country's wheels are also spinning," Rouhani said in his election campaign.

After taking office, Rouhani stepped up work to repair strained relations with the West and to increase "transparency" on Iran's nuclear drive.

He has stood firm, however, on what Iran believes to be its "right" to operate a peaceful atomic program, and says uranium enrichment on Iranian soil is a "red line" for his government.

The objective "to ensure enrichment on Iranian soil has not changed. However, tactics have changed, and those tactics involve active diplomacy and brave engagement to secure national interests," political analyst Mohammad Ali Shabani told Agence France Presse in Tehran.

Rouhani ultimately answers to supreme leader Ayatollah Ali Khamenei, who has always felt cheated by a deal with European powers in 2003 under which Iran temporarily suspended enrichment.

Despite his lack of optimism about the latest talks and his distrust of Washington, Khamenei has recently expressed support for Iran's nuclear negotiators, silencing hardliners in the regime hostile to any concessions to the West.

But Khamenei's support is not seen as open-ended, and Rouhani has "less than a year" to improve the economic situation, says a European economic observer in Tehran.

Rouhani can count on the support of the country's business community, which is "much more confident about an easing of sanctions than six months ago," Tehran-based economic consultant Cyrus Mobasher told AFP.

But a Western diplomat based in the Iranian capital said the Rouhani government has "created expectations among the people and he should brace for reactions if those hopes are stifled."

Without success, "the Rouhani administration will face increasing pressure from conservative groups to alter course back to autopilot," which would lead to "far more inflexibility in terms of foreign policy," Shabani said.