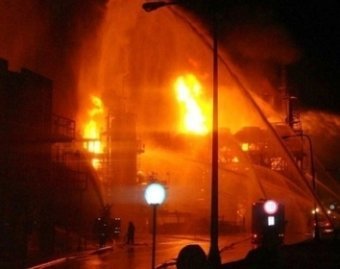 “The fire caused material damage only and the office of the state prosecutor has asked sworn experts to inspect the accident’s site on Monday and provide it with a report in order to take the relevant measures,” NNA added.

The blaze caused heavy material damage and fumes reached all the way to the town of Antelias, north of Beirut.

The depot owned by Ali Hammoud sells plastic crates used for vegetables throughout the country.

The cause of the fire was not known but it came one week after a similar fire engulfed Tourism Minister Fadi Abboud’s plastic factory in Mazraat Yashouh.

Obviously a Zionist, CIA, Western, UN conspiracy against Lebanese plastic, We are serious in our attempt to confront the attack on our national plastic.

Fatso in the hole smoked in bed