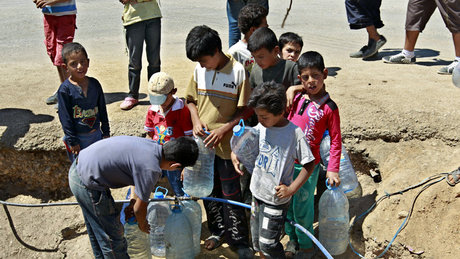 More than 16,000 Syrian refugees have crossed to Lebanon in the past two days fleeing a high-stakes battle, Voice of Lebanon radio (93.3) reported Sunday.

The Syrians are walking across valleys and ridges to reach safety in Lebanon. They are packing into wedding halls and waiting for makeshift tents, said Bassel Hujeiri, former mayor of the border town of Arsal where most of the refugees have headed.

He estimated that some 10,000 people had fled to the town, saying an influx of Syrians during the past three years of conflict had caused the population to nearly double.

Dana Sleiman of the United Nations High Commission for Refugees put the total number of refugee arrivals over the weekend at around 1,000 families. She counted families, not individuals.

A Syrian government offensive in the rugged Qalamoun hills, which stretch from Damascus to Lebanon, seeks to cut rebel supply lines to opposition-held enclaves around the capital.

Activists and analysts say the battle may be the final blow that dislodges rebels from the Damascus periphery, where food is running short and opposition fighters have lost a series of strongholds in recent weeks to forces loyal to Syrian President Bashar Assad.

This what we needed 16K more or 16K less what difference does it make anymore, wayniyé el dawlé?

Ahlein, ya hala. They're filling the void left by the departure of 16.000 good Lebanese who fled Hezbollah terrorism that crippled the economy.