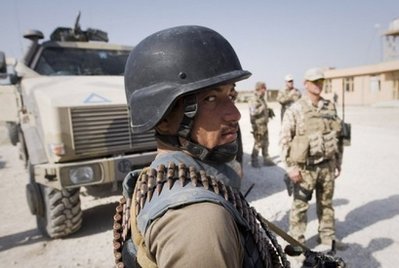 Afghanistan's finance minister on Monday rejected "doomsday" predictions that the impoverished country would plunge back into civil war when the bulk of US-led troops exit.

Many international observers have voiced fears Afghanistan could descend into civil war after the 2014 exit of Western combat forces -- similar to the conflict the country experienced in the 1990s.

But Afghan Finance Minister Omar Zakhilwal told a business audience in the Indian capital that "the doomsday analysis in which ethnically-based political factions in Afghanistan will descend into civil war" was unfounded.

These predictions will "be proved wrong", Zakhilwal told the Federation of Indian Chambers of Commerce and Industry.

Next April's presidential elections "will be held on time -- they are not going to lead to crisis, the Afghan people will accept as president whoever gets a majority of votes", Zakhilwal said.

"There will be no civil war," Zakhilwal said as he pitched for foreign investment in the landlocked nation at a conference on "Doing Business With Afghanistan".

The presidential elections are seen as laying the base for a future Afghanistan as the United States and other Western nations wind down their military commitment but the political process has been fraught with discord.

Most of NATO's troops are due to pull out of Afghanistan by the end of 2014 and a credible election is seen as vital to stability in Afghanistan's first-ever democratic power transfer.

Meanwhile, overshadowing a recent announcement of 10 presidential candidates is a forthcoming "loya jirga", or grand assembly of tribal elders, which will decide on a crucial security pact with the United States.

If the agreement is passed, up to 10,000 US troops will stay in Afghanistan to help fight al-Qaida remnants and train the army.

There are fears if a deal is not reached, all American troops will pull out and local forces will struggle to contain the Taliban.

But Zakhilwal said Afghan security forces were more than capable of ensuring peace in the country.

"Wherever international forces have withdrawn and Afghan forces taken over, not only they have maintained the security, they have improved upon the security," he said.

The minister added that satellite television, mobile phones and other forms of communication had "transformed the mindsets" of the nation.

From no mobile phones a dozen years ago, the nation of 30 million now has 18.5 million cellular connections, Zakhilwal said.

"The idea of going backward and depriving people of privileges the rest of the world enjoys is impossible," he said.

Indian Foreign Minister Salman Khurshid in a speech at the forum promised the "greatest support it is possible to give" during Afghanistan's election process "and beyond".

India, which has given $2 billion in reconstruction aid to Afghanistan since the Taliban regime was ousted in 2001, been a key supporter of Kabul's government.

Both India and Pakistan are locked in a struggle for influence in Afghanistan. Afghanistan has close links with India while Pakistan is seen as backing the Taliban as it attempts to keep Kabul from getting too cosy with New Delhi.