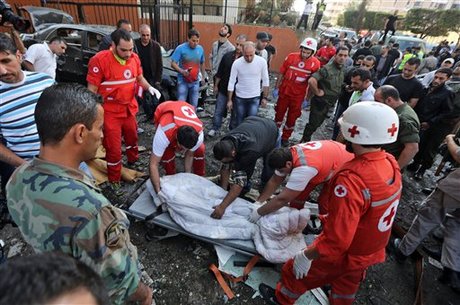 Hizbullah's leadership held a high-level security meeting to determine new exceptional measures over the possibility of new wave of suicide bombings as the matter was in the party's consideration after the recent attacks on its stronghold in southern Beirut suburbs.

“We have entered a new stage that we consider dangerous,” a senior Hizbullah official said in comment published in al-Joumhouria newspaper on Wednesday.

The official said that Hizbullah has taken new exceptional measures amid the rising attacks in the party's stronghold.

“We received the message and it's clear and we know those who are behind it.” the official said, stressing that the attacks will not change Hizbullah's stance but “will make us insist on holding on to it.”

The source expressed fear that the suicidal attacks would directly target the party's centers or random Shiite venues like in Iraq.

“We have exerted efforts recently to prevent explosive-laden vehicles from entering Dahiyeh but suicide attacks are more hard to contain,” the official added.

At least 23 people were killed and 150 wounded in twin suicide blasts that targeted the Iranian Embassy in the Hizbullah stronghold of Bir Hassan on Tuesday.

The powerful explosions just opposite the multi-storey embassy caused chaos, ripping the facades off nearby buildings and setting cars ablaze.

They come after two other bomb attacks this year in the southern suburbs of Beirut that are the bastion of Hizbullah.

The group, which is sponsored by Iran, has drawn controversy for sending thousands of fighters to support the regime of Syria's President Bashar Assad as he battles a 32-month-old uprising.

A minister close to Hizbullah, speaking on condition of anonymity, told An Nahar newspaper that the party didn't exclude the possibility of suicide attacks after the bombing that targeted Rweis.

“After the twin suicide blasts near the Iranian Embassy, Lebanon entered a new level...” the minister said.

The minister stressed that the party is mulling ways to confront this new trend of attacks.

Nasrallah stop your war in Syria, the damage you are doing there invites the other terrorist to do the same in Lebanon. You think because you made a speech telling them lets keep the fight in Syria, they were going to do as you asked? Let the murderer Assad do his own fighting.

it's not assad's fight anymore, not since they fired rockets on hermel, or when they attacked border villages, or when they threatened to punish christians and shias in lebanon if they didnt support the rebels. that was in 2012, way before hezbollah's involvement
http://www.youtube.com/watch?v=kOUgVphO2X0

now they think they can intimidate us with their coward attacks, but in lebanon there are two kinds, those who bend with the wind, one day to israel, the next day to syria, then again to israel (and i'm not just talking about joumblat) and those who stand one position till the end. i leave it up to each one to know who's who.

A paid mouthpiece has a job to do. No matter what you write justifying your terror party's sectarian war in Syria, you cannot change the facts. So, enjoy your failed attempt at re-writing history the "resistance" way. There are many Jammo's and you are his twin.

"A paid mouthpiece has a job to do" is that why you and ice-boy commented here even though you clearly had nothing to say?

@Mowaten, you have a completely flawed view of the situation ! Hezbollah brought war to Lebanon. They did this in 2006, they are doing this now.

The only way out is for Hezbollah to get out of the mess they have created ! Get out of Syria and plan their transition from a terrorist paramilitary group to a political entity.

As much as we condemn such acts of terrorism, you cannot blame people who are getting butchered by Hezbollah from hitting back at them... Hezbollah themselves do not sit "idle" when they are attacked so why should their enemies ?

For all I know, Hezbollah brought this to themselves and are responsible for civilian casualties !

There are so many political parties without weapons, we don't see them getting bombed or attacked ... some of their leaders were assassinated but this did not result into war ! Hezbollah should learn from them !

yeah FC, more like i have a flawed view of the m14 fairytale.

i speak of dated events and facts, the video i linked above is limpid in demonstrating the threats i was talking about for instance.

you boys tell stories and never bother to provide any factual backing, so i'm not going to spend any more time repeating the same things.

@Mowaten : when a video "supports" your point of view, you believe it to be real. When a video goes against it, you call it a fabrication :)

When I show you videos of Hassan Nasrallah calling for the establishement of an Islamic state in Lebanon. Or of Michel Aoun accusing Bashar el Assad of murdering Hariri, you choose to ignore those.

You are just incapable of arguing against my point of view that Hezbollah is responsible for this terror they are bringing to Lebanon ! Your only arguments are a "ghost threat" that you blow out of proportion based on theories and bogus videos that suit your needs rather than facts...

Especially this video which is edited and commented by your allies ... they most probably filmed it themselves the same way your opponents fake deaths and murders ...

inviting terror? when has terror ever needed an excuse? you think these idiots are worried about ant justification they have to blow young children apart? and dint become like the lebanese traitor politicians that WANT these fools to destroy lebanon thinking they will come along and pick up the pieces. I assure you, the muqawama wont let the takfiris win and hariri better make himself confortable in saudi arabia, there is no place for him in Lebanon

KSA ,
You are the major sponsor of terrorism in our country & our region !
You shall never ever have the upper hand to direct the maniacs you have employed to blow themselves up killing innocent civilians !
Your time is coming to an end , the Saudi dynasty is at the tails' end .."
You will not exist within the 10 year period .
Signed Wolf !!!!!

wolfie, take it easy, with the syrian conflict, there is more chance that Lebanon disintegrates Yugoslav-way than something happen to KSA.

@Southern : please show me the "Wahhabis" ... you're the one who's brainwashed !

The best security is pulling out of Syria and stop attacking others ! No weapons, no war ! Simple !

No one is advocating murder. And Hezbollah which is responsible for the murder of civilians, murder of politicians does not have the right to complain ! People fight fire with fire and until you stop the fighting, you will get a taste of your own poison !

And innocent people are going to die because of your arrogant and stubborn leader Hassan Kezballah. All these deaths are on him ! Not Syrian rebels, not Israel ...

@Southern : this is your theory. Even if it's true, how can Saudis justify all this if Hezbollah is a peaceful and weaponless entity ? They would be unable to convince their idiots to attack for no reason.

In any case, there is no difference between Saudi influence and Iranian influence. Both are funding, arming and sending terrorists to fight. Hezbollah is no better and is no more "honorable" as these sunni terrorists...

Stop your propaganda because no one believes your excuses...

I still do not see a 40,000 sunni terrorist army in Lebanon with close to half its members fighting in Syria...

They are not a threat ! They do not bring war to Lebanon !

Hezbollah is the one doing all the provocation, interfering were they have no right to interfere and causing all these tensions !

You will never be able to convince me otherwise because all your arguments are based on lies and excuses. Not facts, not logic ! You can twist the story all you like ! It doesn't make it true !

Get your own avatar

why u dont use ther term ur masters, Nassy and Bashar, use, i.e. takfiris ? Do know that wahabism doesn't exist ? Did u ever open a book of Mohamed ben Abdelwahab or u just repeat what u heard in ur husseynia ?
I'm sure u never read one of his texts so u're the brainwashed one...

this terrorist extremist Iranian filthy militia called hizbushaitan is driving the shia community to be the most hated and the most targeted from now on by terrorist acts.
if they support them, then let them pay the price, otherwise, it is about time the shia community starts cleaning its house from within.

And lets work together

Another guy who promotes hate so sad

“We have entered a new stage that we consider dangerous,” a senior Hizbullah official"

NEVER had they say that during the chain of assassinations against M14 people...
hypocrits they are...

hezbollah have to act like nero did .... they have no other choice...