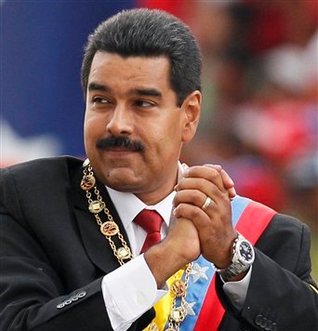 The United States on Wednesday voiced concern after Venezuelan President Nicolas Maduro was given emergency powers to rule by decree for the coming months.

"We are concerned that the Venezuelan National Assembly has granted decree powers to President Maduro for the next 12 months," State Department spokeswoman Jen Psaki said.

"We believe the separation of powers and the presence of independent branches of government are essential elements of democracy," she told reporters.

The one-chamber National Assembly on Tuesday gave the elected socialist Maduro wide-ranging special powers that he says he will use to target corruption, but which his opponents argue is a last-ditch attempt to paper over economic damage caused by the government's policies.

Even though under Venezuela's constitution such a move is allowed, Psaki insisted "that doesn't make it OK.

"We feel... it's essentially important for the people to have a voice in any country, in any decision-making process," she told reporters.

"And that's why the separation of powers is so important."

Maduro maintains that the opposition, whom he only narrowly beat in polls following the death of longtime leader Hugo Chavez earlier this year, are waging "economic warfare" against the country.

Maduro has said he will use the year-long expanded powers to impose caps on private sector profits and crack down on speculators.

The vote is the latest move by the Venezuelan leader, a protege of Chavez, to strengthen his hand as he faces an important political test in municipal elections in this oil-rich, OPEC member nation next month.