Kerry Says He and Karzai Have Agreed on Afghan Deal 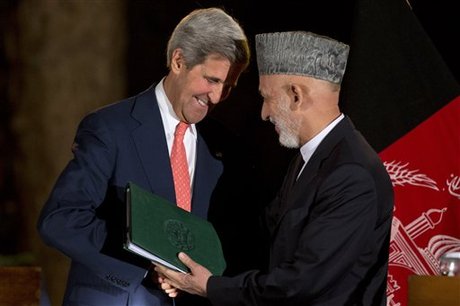 U.S. Secretary of State John Kerry said Wednesday that he and Afghan President Hamid Karzai had reached agreement on the terms of a deal to cover the presence of American troops beyond 2014.

"As we sit here tonight we have agreed on the language that would be submitted to a loya jirga, but they have to pass it," Kerry said, talking about a draft text of a bilateral security agreement to be voted on by Afghan elders. He also stressed there was never any talk about the U.S. issuing an apology to Afghanistan for events over the past 12 years.