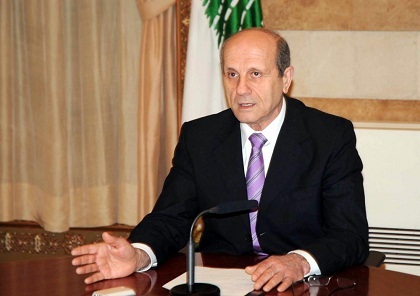 Caretaker Interior Minister Marwan Charbel has warned that the trial of the suspects in ex-Premier Rafik Hariri's 2005 assassination by the Special Tribunal for Lebanon early next year could make Lebanon's crisis worse.

In remarks to An Nahar daily during his official visit to Paris, Charbel said: “When trials start, there will be evidence that could affect the situation in Syria and could make the situation in Lebanon worse.”

The STL has indicted five Hizbullah suspects connected with the Beirut bombing that killed Hariri in Feb. 2005.

The in absentia trial of four of them has a tentative start date of January 13, 2014.

Charbel cited several other events that he said would put Lebanon in one of the most difficult situations yet.

He said the election of a new president in Lebanon, presidential elections in Syria, choosing a successor to Grand Mufti Sheikh Mohammed Rashid Qabbani and holding the parliamentary polls were all decisive issues.

“They are directly linked to what's happening and what will happen in Syria,” Charbel told An Nahar in remarks published on Thursday.

The caretaker Interior Minister also warned that the process to elect a new head of state to replace President Michel Suleiman, whose term expires in May 2014, will be more complicated if the Syria war turns in favor of the Assad regime.

“The decision to elect (the president) is not in the hands of the Lebanese,” he said. “It is an international decision which in the past stage had been given to the Syrians.”

Asked about the security situation in the northern city of Tripoli, Charbel said that he had implemented a plan before his trip to France but he was criticized for meeting with the leaders of the hotspots.

“But what's the solution?” he asked.

He said the Lebanese authorities would either attack the warring sides or seek for a compromise.

“Bab al-Tabbaneh (residents) don't want the army while Jabal Mohsen rejects security forces,” he said. “So we agreed to deploy the police backed by a military unit.”

But Charbel issued a warning that any political dispute could lead to a military conflict given that both neighborhoods receive orders from abroad.

The two districts have been engaged in several rounds of deadly fighting, a sign of the Syrian war's spillover to Lebanon.

Bab al-Tabbaneh is a majority Sunni and backs the rebels fighting in Syria. Jabal Mohsen's residents, on the other hand, are from the Alawite sect of Syrian President Bashar Assad.

“When trials start, there will be evidence that could affect the situation in Syria and could make the situation in Lebanon worse.”… that can not be, the Assad/Ayatollah cheerleaders have told us a least a thousand times that there is no evidence and the STL is a Zionist-US-EU-UN-Wahabi plot. Plus Nasrallah has handful's of evidence that will proof it was the Israelis and he will personally deliver it to the tribunal.

WTF!
is this a minister of interior with a right mind?
now justice is to be feared?
now we need to be afraid of justice from terrorists?
WTF?

Lebanon will never be a stable country so long as Saudi Arabia continues to arm and fund terrorism here.

oh what a broken propaganda record you continue repeating.
terrorism is and has been for over 3 decades sponsored and executed by your Iranian master in this whole region.
so spare us this continuous BS.

rouh ya marid Mika. it isn't about Sunni-Chia as Bachar wants to make it look like, it's about justice.

Lebanon will never be stable as long as there is people like you who think that it is ok for them to have all sorts of weapons including missiles and form a country inside a country and follow the order of a sect leader in another country and then say that others are traitors and follow other countries , so its ok for you and not for others hezbul shitan logic :/

Terror villages? Are you talking about Shi'ites? Is this really coming from a filthy Sunni, or am I missing something?

Charbel is saying it like it is: we do not control our country, foreigners do. They pick our presidents for us, they pick our cabinet, and they can ignite strife or calm things down at the snap of a finger. We are reaping what we have sown.

yes jabal you are right but what is worst is we as people (sheep) accept it!

Regardless of the outcome of the tribunal, whether sunni radicals, hizballa members, christian fanatics, snow white and the seven dwarfs...are found guilty, we should seek the truth no matter what!

you are so weak and ridiculous!!! I hate your weakness and your fake abou melhem profile, impotent men are a shame on their countries!

he was the only FPM I respected until today, because he's cultured (unlike Bassil and baba in law....) he lost that today.

they should make a new ministry for him ( the joke ministry ) and he can rule the shows like lol and basmet el watan and so on . coz he is a joke

I wonder if he realises how sick his statement sounds!

Justice must be served, for Rafic Hariri and the others. including the peaceful mr Hachem of the Lebanese Option Party. The hizbullah assassins are unmasked!

1- An interior minister has NO RIGHT to discuss Judicial matters when there is an ongoing case.

2- Worsen Lebanon crisis ? Murdering Hariri in the first place has worsened Lebanon's crisis. In fact, all our problems started when Hezbollah murdered him. In fact, it could not be worse. Until they go to trial and are convicted OR acquitted, the crisis will never end !

3- To the idiots up there who calls the STL a false tribunal (Hello Southern), please explain to me what a "real" tribunal is ? Do you let Hezbollah get away with murder ? Or do you prefer Hezbollah to murder Lebanese judges that "dare" question their assassins ? This tribunal is scientific. There is huge amounts of evidence pointing to Hezbollah. You have all the chances in the world to "prove" that this evidence is false ! If you are truly innocent, it will be easy ! The real problem is you're not.

Southern, I respect you opinion about the tribunal. Having said that, I believe that the tribunal must proceed. Hopefully the trial will be well covered, preferably live, and we will all see if this is a false tribunal as you believe, or a tribunal that put justice and integrity at the forefront.
Please take a few minutes to review the statement of the president of the tribunal:

Phoenix, I read the article in English and Arabic and nowhere do I see that Charbel is saying that the tribunal is wrong. He is simply saying that WHEN the trial start, it will uncover TRUTHS that will aggravate tensions in the country. He is not opposing the trial, but rather warning of things to come due the EVIDENCE that the trial will reveal. Don't we all know that this tribunal will open a can of worms? This is long overdue, in my opinion. Let's get the evidence and live with the consequences to the country. Sure beats being lied to all the time.

If you read between the lines, Charbel has actually confirmed what every body knows. HA are guilty and to bring them to justice will bring down the country. HA was faced with the predicament of accepting Saad Harriri's offer and conditions at the cost of a confession and subsequent loss of face and condemnation by the Lebanese, or fight it out and bare the consequences. Unfortunately they chose to keep their arms and fight it out. The predicament being that Hassan could chose to be of the hook but would have to implicate Iran and Syria by doing so.

This trial is like a game of spin the bottle, one day it's Bashar, one day it's Israel, one day it Iran now it's HA and there is proof... Fools of the STL, for your own credibility, try this case and put all you have on the table. To all the sectarians out there, HA are not the only ones who are armed in Lebanon and are not the only ones fighting in Syria. The strife has moved to Lebanon because the KSA plans have been defeated in Syria. They will also be defeated in Lebanon. Syrians and Lebanese reject oppression. KSA is ran by an oppressive, backward, extremist wahabi regime that openly supports and exports terror to other countries.

"KSA is ran by an oppressive, backward, extremist wahabi regime that openly supports and exports terror to other countries."

and iran that finances and supports hezbis? did you forget it on purpose? it is the same regime chia style!! LOL