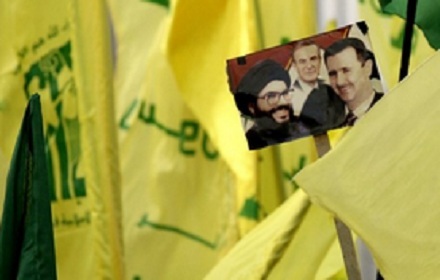 The Gulf Cooperation Council on Thursday approved what it described as “the necessary measures against Hizbullah's interests” in the Gulf countries, after endorsing recommendations during a meeting in Riyadh in September.

“The interior ministers of the Council's member states have approved the results of the extraordinary meetings held by the ministries' undersecretaries regarding the necessary measures that should be taken against the interests of Hizbullah and its members and associates in the GCC countries,” Council chief Abdul Latif al-Zayani said following a meeting in Bahrain.

Bahraini Interior Ministry Undersecretary Khaled al-Absi said the meeting discussed how to put into effect the recently-approved GCC resolution calling on members to take action against Hizbullah members in Gulf region. The measures could include visa cancellation and financial and commercial transaction restrictions.

The GCC's measures come in response to Hizbullah's intervention in the Syrian war alongside President Bashar Assad's forces. The majority of Gulf countries back the rebels who are trying to topple the Syrian leader.

Look at that, what a beautiful family portrait… but they left out their spiritual leader the Ayatollah. I hope the GCC is Planing to deport the Hizbullah operatives back to their homeland Iran.

Poor Souther… Hizbullah is protecting Assad and they flat out admit it, if he falls their armament supply line is cut. They are part of the Axis: Iran, Assad, Hizbullah and they boast about it constantly. Hizbullah say's it does not need Lebanese consensus and takes orders & payment from the Ayatollah.

Phil the pajama general is a 2-bit stooge of the Axis and is not part of their equation. Aoun's partners have the same low regards for him as his opponents do :-)

guys have you noticed that aoun is not ecstatic these days about hizbushaitan?
if the nuclear deal was such a victory, do you think aoun would be so silent? he would have guaranteed the presidency. so why is he not?
it is because he knows the days of hizbushaitan are over.

Where is the threat of those extremists against Lebanon? Are you mentionning the booby trapped cars that are sent against HA areas by those extremist in retaliation to HA involvement in the Syrian war. And before the Syrian war had started what is HA doing with all its arms? Defending lebanon from Israel when Israel has withdrawn from Lebanon. Ha needs to justify its existence and weapons of a devilish enemy so it can remain armed and dominant in Lebanon. HA is stealing away the democracy in Lebanon, the functioning of Institutions, of Justice and Law. It is crippling the economical and social wealth of the Lebanese society all to the benefit of Wilayet al Fakih and the tyrant regimes in both Iran and Syria?

The GCC should deport all these sectarian hateful thugs. They live, work, and prosper in the Gulf, yet they curse the very hand that feeds them. From inception, they are full of hate and deceit. Good Riddance..... Join HA and go fight in Syria.

Go to Iran and worship Hussain.

Have you lost your mind, NostraBenzona? Don't you know what it means to have them back? Don't you know that they will... well... umm... duh... go to Syria to continue kicking your... well... umm... duh... butts and those of the GCC-supported Sanni Takfiris for Democracy until the "ASSad" regime falls again and again and again, and eventually the regime would come over with these and deal with you, loud-mouth warriors, here at home? Re-think your thoughts and re-publish NostraBenzona! You might be losing your genius somehow.

no i didn't. i got back less than an hour ago. where is it?

they are all jihadists.... that's the conclusion, and they are all desperate to get 70+ virtual virgins, because in real life, they can't afford getting a single decent woman by their side.

btw twinny, you know when I read FT/Movaten and Cie I get really depressed and moody because I foresee a dead-end for Lebanon a cause of such stupid and manipulative people . well, anyway, the point is they cost me A LOT of money, yes, I cheer up by doing some impulse shopping on amazon and ebay... you should try it... that's the only exutory I found so far ;-)

GCC is hosting and giving work to shias, Sunnis are hanged and persecuted in Iran...

of course, they're not worth our time and money/// but the fact is lebanon is also inhabited by sick people.... no wonder there have always been mass exodus since the 19th century. we used to have collaborators of the Ottomans, then The French, the Palestinians, the Syrians, the Israelis.... it has always been populated by traitors now the latest trend is the Iranians..... and they firmly beleive they can take over and dominate an establish some kind of Islamic Republic ... it seems they haven't read history books. Ultimately, they will be defeated by in the mean time a vast majority of the general population is suffering. This is disturbing because life is short et peu de monde en profite si ce n'est les fauteurs de troubles.

Ceci dit, your photography hobby is niiice, I'll turn to you for advice whenever I'll make up my mind to replace my ageing Canon G9 ;-) in 2014 inchallah!

those who don't die..... such as this Lebanese Option Party guy.

there are so many similarities between the Hezb and the Nazis. especially in the propaganda or organisation.

Around 8 million Sunnis in Iran. Hanged? Where did you get your info. From?

we r so sick and tired of armed farmers.... goddamn

they should be plowing our fields and growing vegetables.

kawaaaaaaiiiii 'rawr' . i have a crush on ur avatar.

peace is still half asleep, he'll eventually open his eyes and see how bad the situación is. not that it will change anything 2 the ecuación... oh yes, lebanese (patriotic ones) have 2 be patient.

the nicknamed 'sayid nusralla' terrorist who died in syria yesterday is premonitory.